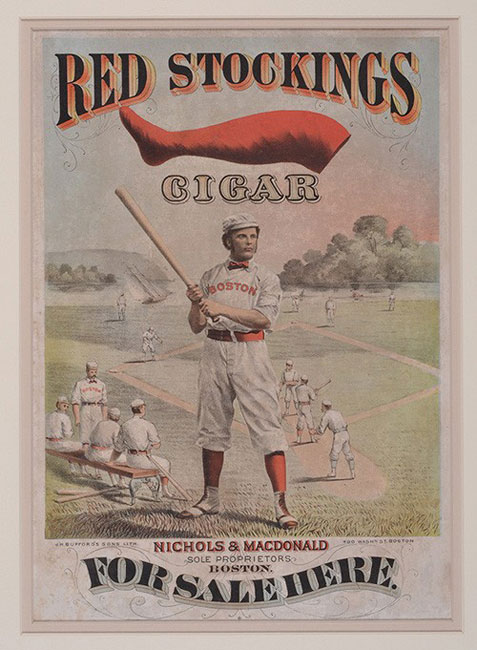 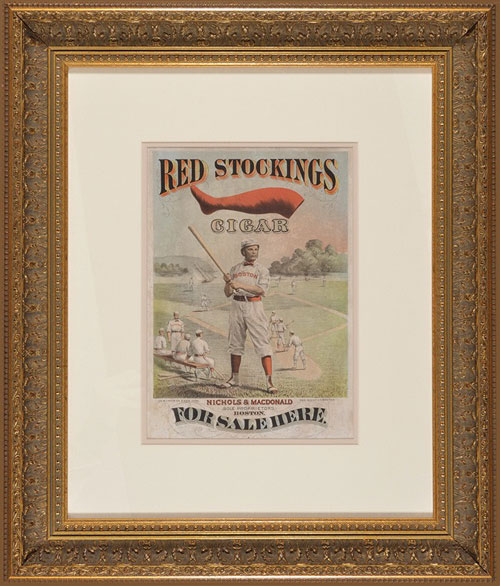 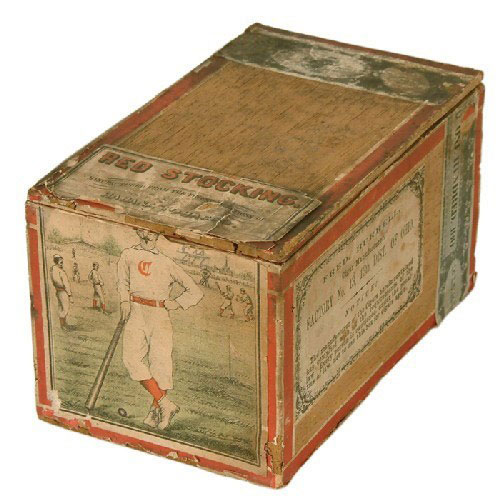 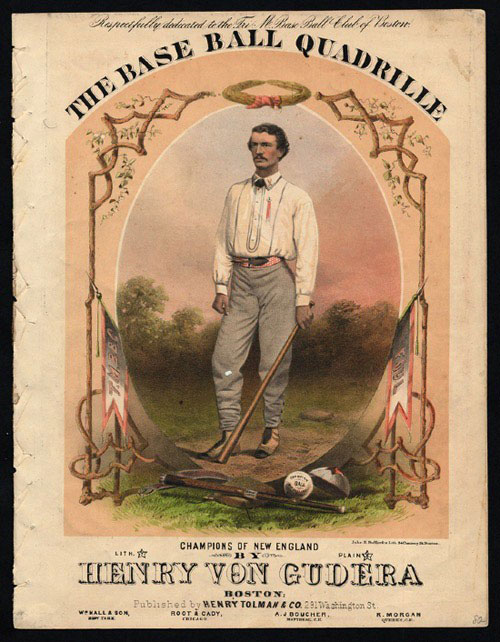 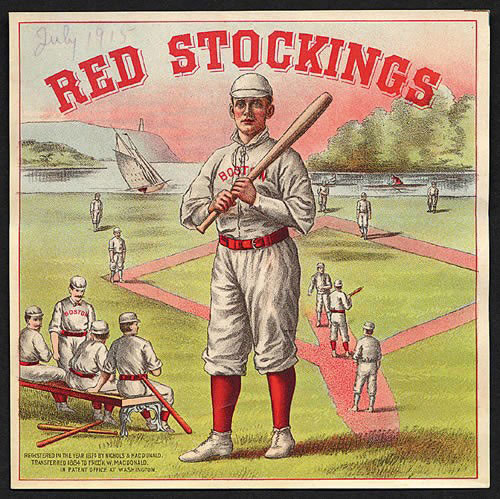 Before Boston Garter. Before Wheaties. Before â€œBe Like Mikeâ€ and Mars Blackmon and way before Bo Knowsâ€¦ there was George Wright for Red Stockings Cigars.

Very few baseball items in the world today are of such astounding historical and cultural importance as the piece offered here: an 1874 advertising poster for Red Stockings Cigars featuring Hall of Fame shortstop George Wright. Before we begin extolling its many distinguishing features, such as its aesthetics (self-evident), rarity (it is the only known example), and vintage nature (one of the earliest baseball advertising pieces extant), it must be properly identified for what it is, first and foremost:

The earliest American advertising poster featuring the endorsement of a commercial product by a player or sporting figure. Ever.

This is the poster that started it all, the one that ushered in the age of player endorsements and forever changed the commercial landscape in American culture. That a baseball player would first be chosen for the honor of endorsing a product is not surprising, given the incredible popularity of our national pastime. Nor is it surprising that George Wright would be that player, for he was clearly without equal on the baseball diamond at the time.

The colorful stone lithograph (11 x 15 inches) features a large illustrated image of Boston Red Stockings shortstop George Wright in a striking batting stance. The background displays a pastoral scene of a game in progress. The text, printed above and below the illustration, reads â€œRed Stockings Cigar â€“ For Sale Here.â€ The brand logo, a large â€œred stockingâ€ appears within the body of the top advertising text. Both the manufacturer, â€œNicholas & MacDonald â€“ Sole Proprietors â€“ Boston,â€ and lithographer â€œJ. H. Buffordâ€™s Sons â€“ 490 Washn. St. Boston,â€ are identified in print along the base.

Interestingly, the illustration of George Wright on the poster was copied from a cabinet photograph of Wright produced in either 1871 or 1872 by the Warren Studios of Boston (REA sold an example in 2007 for $17,000: http://www.robertedwardauctions.com/auction/2007/20.html ). Wright was one of many Boston Red Stocking players photographed in uniform by the studio at the time. Today, those Warren Studios cabinets depicting members of the Boston Red Stockings are widely recognized as the first individual baseball-player cabinet cards of the professional era.

This is the only known example of the 1874 Red Stockings Cigar advertising poster. It was discovered many decades ago by renowned collector and hobby pioneer John Bounaguidi and was the highlight of his famous and, at the time, unparalleled collection. Since selling his collection decades ago, the Red Stockings Cigar Poster has changed hands. For many years its whereabouts was unknown and even a quality picture of it was unavailable to collectors, publishers, and historians. It seemed as if it had literally been lost to the baseball memorabilia world. That, in fact, was essentially the case. For years it has very quietly resided in a world-class American advertising collection. Because of its extreme rarity, many advanced collectors have never seen this poster, with most having only heard rumors of its existence. A small image of it did appear as an illustration in an article written by Bounaguidi for the 1986 July/August edition of Collectors' Showcase magazine. For most, that tiny image has been the only tangible evidence that this legendary poster really did exist.

Although undated, the poster can be conclusively pinpointed to the year 1874 by a review of the public records relating to both the manufacturer and lithographer. The tobacconist Nichols & Macdonald was not listed in a Boston city directory until after the Great Boston Fire of 1873. Also, the lithographerâ€™s address on this piece is listed as 490 Washington St., Boston. The 1875 Boston city directory shows that the company of J. H. Buffords Sons moved to the new location of 666 Washington Street in that year. Based upon those two pieces of information, the poster can be dated with certainty precisely to 1874.

It is hard to imagine today, in a culture that worships professional sports and celebrities, a time when athletes were not recruited to endorse products, but that was the case in 1874. Nichols & MacDonald were the first to envision the persuasive power of endorsement on consumer purchases. It isnâ€™t known exactly how much George Wrightâ€™s endorsement pumped up Red Stockings Cigar sales in 1874, but it would be a tactic that soon gained traction, eventually transforming the relationship between sports and commerce in America as sports stars and celebrities became marketing assets in the decades that followed. As a point of reference, the only other nineteenth-century player-endorsed advertising poster that is even remotely comparable to this extraordinary piece is an 1889 E & J Burke ale poster featuring Cap Anson and Buck Ewing. An example of that poster, which also originated from Bounaguidiâ€™s collection, appeared as Lot #1 in REAâ€™s May 2008 auction, where it realized a final sales price of $188,000.

The poster has been professionally cleaned, removing superficial residue, at which time it also benefited from some extremely minor conservation along the perimeters (minor edge roughness in the border was strengthened with starch paste). We have been told that a tiny abrasion in the background to the right of the ship was professionally mended (no in-painting was necessary); we can't see this but note the report. There was no need to mount or back the original stone lithograph; it has been kept in its original state. The colors remain flawlessly bold and vibrant. Excellent to Mint condition. Beautifully matted and framed to total dimensions of 23 x 27 inches. Reserve $100,000. Estimate (open). SOLD FOR $189,600