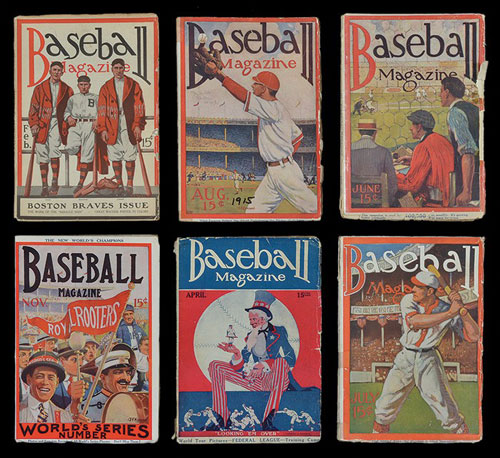 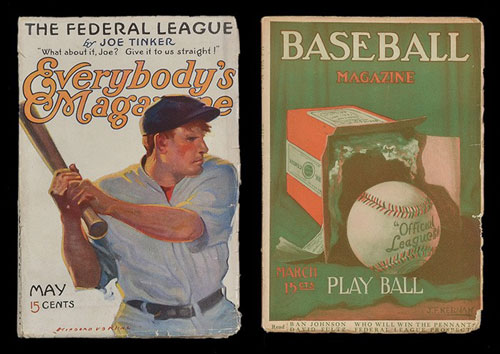 Run of sixteen issues of Baseball Magazine , spanning the two-year period 1914-1915, including the the April 1915 "Walter Johnson Number." For over fifty years, beginning in 1908, Baseball Magazine was the voice of the National Pastime, documenting every nuance of the game and its history in word and photographs. Today, Baseball Magazine is no longer published, but old issues open a window to history that is unrivaled, providing information and photos that often can be found nowhere else. This collection is especially noteworthy because if features sixteen of the twenty-four issues covering the short-lived Federal League, which was only in existence as a major league from 1914 to 1915. As collectors of early publications in general, and Baseball Magazine in particular, are well aware, condition is tricky to capture with a simple grade. There are so many pages, and so many potential condition issues (especially small tears, for example) that even in technically modest grade (which, when accurately described, most early issues are!) they have great merit. Most of the issues offered here have many of the flaws common to old periodicals, including, but not limited to, cover tears, partial separation along the spine, foxing, minor stains, and tape repair. 1914: January (Gd-Vg), February (Gd), March (Gd-Vg), April (Gd), May (Gd), July (Gd), August (Gd), December (Christy Mathewson Number; Fr-Gd). 1915: February (Gd), April (Walter Johnson Number; Fr-Gd), June (Fr), July (Fr), August (Fr-Gd), October (Vg-Ex), November (Vg-Ex), and December (Vg-Ex). Also included is a May 1914 issue of Everybody's Magazine featuring an article about the Federal League written by Joe Tinker (Gd-Vg). Total: 17 magazines (16 issues of Baseball Magazine and 1 of Everybody's Magazine ). Reserve $200. Estimate $500+. SOLD FOR $2,666