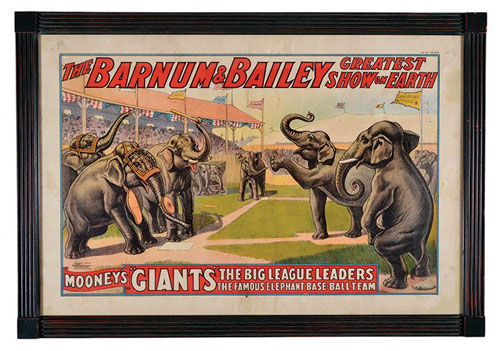 Extremely rare Barnum & Bailey circus poster heralding the appearance of "Mooney's Giants-The Famous Elephant Base-Ball Team." The colorful half-sheet poster (29.5 x 19.5 inches) features an extraordinary illustration of the talented pachyderms playing baseball, complete with a fully equipped catcher and umpire. Copyright 1913 by the Strobridge Litho Company of Cincinnati and New York. This is one of the rarest of all circus posters, and also one of the most delightful, fun, and interesting baseball-related display pieces ever produced. Featuring exceptional graphics, this poster generates positive attention and a positive emotional reaction across the board, a response that few display pieces of any kind (baseball-related or otherwise) can match. This is only the third example of this poster we have ever seen. It originally appeared as Lot 984 in REA's April 2006 auction, where it sold for $3,770. It has been consigned to this auction by the estate of that original purchaser. The other two posters we are aware of were also sold in years past by REA: The first appeared as the cover lot in Robert Edward Auctions' June 1996 auction. That example was purchased by special request specifically for donation to the Hall of Fame, and is now on display in Cooperstown as part of the Hall of Fame's permanent collection. The second appeared as Lot 1185 in REA's May 2009 auction, where it realized a final sale price of $7,638. The poster has been linen-backed and has benefitted from professional restoration. The year "1913" and the number "16" are written in pencil, respectively, along the bottom and top left borders. Although some of the restored areas are visible to the naked eye upon close inspection, they are quite unobtrusive and do not detract from the poster's outstanding Excellent appearance. This is a spectacular display piece with a rare universal appeal. Framed to total dimensions of 32.75 x 22.75 inches. Reserve $1,000. Estimate $2,000++. SOLD FOR $8,295