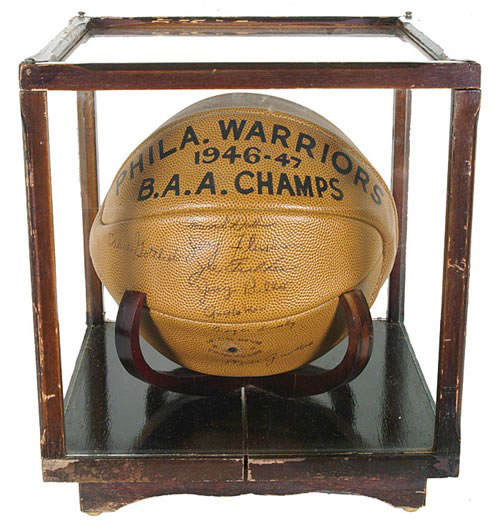 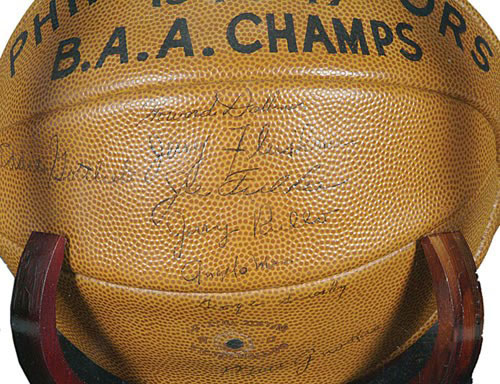 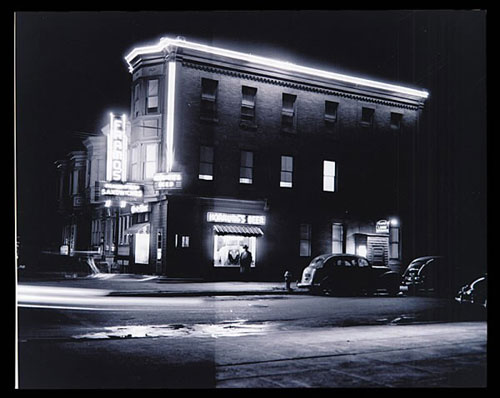 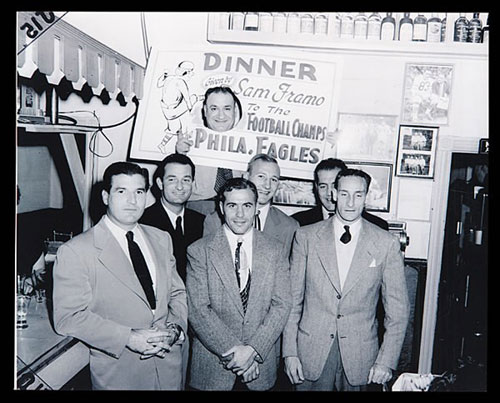 Offered here is one of the most historically significant items in existence relating to the birth of professional basketball: a Philadelphia Warriors team-signed trophy ball commemorating the club's 1946-1947 BBA championship in the league's inaugural season. (The Basketball Association of America was the forerunner to the National Basketball Association; its formation in 1946 signaled the advent of modern professional basketball.) Its provenance is equally impressive: This ball was on display for many years at Framo's bar in Philadelphia. Owner Sam Framo was Philadelphia's answer to Boston's "Nuf Ced" McGreevey and his bar was the favorite watering hole for all of the local sports personalities as well as the city's most die-hard fans. Framo's was also the city's preeminent sports museum and, like McGreevey's Third Base tavern, was famous for its vast display of Philadelphia sports memorabilia. Ideally, a photograph of Framo's bar, taken in 1951, clearly pictures this very ball in its custom-made display case sitting on a shelf amid a bevy of similar display cases, trophies, bats, balls, photos, and other diverse memorabilia. That photo (as well as a few others picturing both the interior and exterior of Framo's bar) accompanies the ball and is perfect for display with the piece. To see the photograph with the signed trophy ball in the background, and then to see the ball and case at the same time, is remarkable, almost as if a time machine transported the ball from 1951 to the present. The most important display items in Framo's bar were kept as special keepsakes by the Framo family after its closing many years ago. This ball was originally purchased directly from Sam Framo's son.

The brown leather basketball, manufactured by Reach, is lettered "Phila. Warriors - 1946-47 - B.A.A. Champs" in black paint along a side panel. On the two panels directly below are the black ink signatures of eight team members: Eddie Gottlieb (coach), Joe Fulks, Harry Dallmar, Jerry Fleishman, Jerry Rullo, Angelo Musa, George Senesky, and Matt Guokas. All of the signatures have been boldly scripted and grade "9/10." Both Gottlieb and Fulks are members of the Basketball Hall of Fame. Gottlieb is one of the most important figures in professional basketball. In addition to leading the Warriors to the league's first championship he later served as chairman of the NBA rules committee for twenty-five years. In that capacity he was instrumental in the league's adoption of the 24-second clock and the rule against zone defenses (both of which saved the professional game). "Jumping Joe" Fulks was the greatest offensive player of his era and led the league in scoring during its inaugural 1946-1947 season, when he averaged 23.2 points per game (during that time teams rarely scored over seventy points in a game). In 1971 he was named to the NBA 25th Anniversary Team and was later one of the first players inducted into the Basketball Hall of Fame.

The ball, a Reach "High Scorer" model featuring leather laces, is a spectacular example of a vintage 1940s pro-model basketball and is itself a museum-quality piece. Aside from having lost a small amount of air, the ball remains in spectacular Excellent to Mint condition. Its phenomenal condition is due to its being housed in its original wooden display case, with glass-paneled sides, for the past sixty years. The case (12 x 12 x 14 inches) displays wear commensurate with its age, including a few nicks and chips, as well as some loss to the finish, and is in Very Good to Excellent condition. While there is no way to know with any certainty, it is very possible that this is a game ball, possibly even from the team's final win in the championship series. The tradition in sports has always been to decorate only actual game balls from the respective event. It is the ball that is important, and that is why teams choose to decorate them: to preserve the historic ball for future generations.

The history of the NBA begins in 1946 with the founding of the BAA. The BAA sought to popularize the game by establishing teams only in major cities, which was a significant departure from the professional leagues that preceded it. In 1949 the BAA merged with the National Basketball League (NBL), at which time the league name was changed to the National Basketball Association. This ball commemorates not only the first NBA championship, but the advent of professional basketball as we know it today. One would be hard pressed to find any item having greater significance to the history of the league than this extraordinary ball. That fact, combined with its impeccable provenance, makes this the most historically significant basketball piece we have ever offered. In our opinion, this is an item that deserves to be on permanent display in the Basketball Hall of Fame. This trophy ball has appeared at auction once before when it was offered as Lot 1558 in REA's May 2008 auction. At that time it realized a final sales price of $11,750 and it has been consigned directly from the original purchaser. LOA from James Spence/JSA. Reserve $2,500. Estimate (open). SOLD FOR $21,330