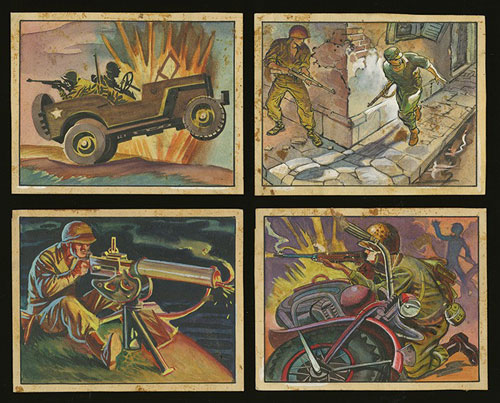 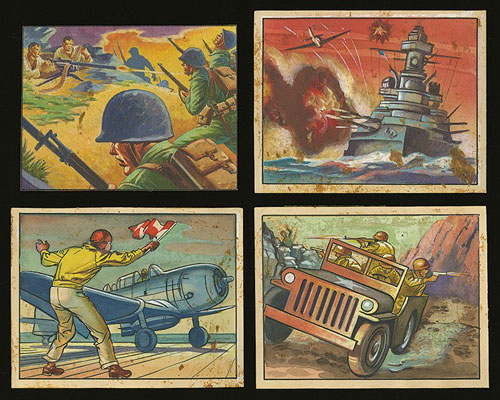 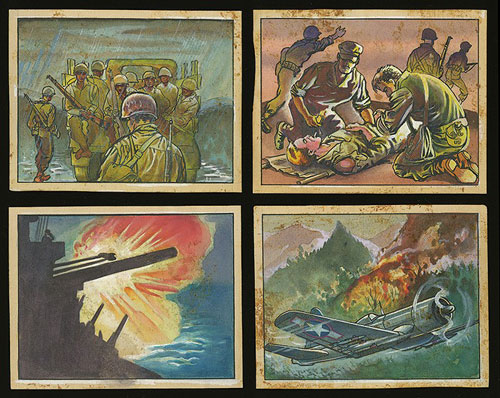 Extraordinary collection of nineteen original artworks used in the production of Topps' "Freedom's War" set. "Freedom's War" is one of the most comprehensive sets of military cards ever produced. The set included Korean War scenes, combat training, military insignia, weapons, medals, generals, airplanes, ships, and even a set of diecut tanks which could be made into stand-up toys. Topps used multicolored artwork and photographs in the production of the set, which was distributed in three printings over a two-year period that began in the summer of 1950. The offered artworks each measure approximately 4 by 5-1/8 inches and are executed on thin artist's board. All the pieces are in Excellent condition. Eleven of the artworks display scattered adhesive residue transfer on the front (likely from stacking against other artworks on which the production-related adhesive on the reverse was not yet dry), which is mentioned for the sake of accuracy but does not detract from their visual appeal. The blank reverses display the aforementioned residue along with a pencil-written card number. The collection includes artworks for the following cards: #61, 128, 129 (borders neatly trimmed off), 130, 131 (borders neatly trimmed off), 132, 134 (two small areas of paper loss on front), 135, 136, 137, 138, 139, 140, 142, 143, 144, 146, 147, and 152. The artwork for card #61 varies from the other artworks in that it appears to be an early stage, non-colorized pencil drawing which underwent some slight changes prior to printing as it is different than the final published card. "Freedom's War" original artworks are extremely rare. REA offered another collection of nineteen artworks in the Fall 2013 auction (appearing as lot #1113 and realizing $9,480, and representing the other half of a collection that at one time numbered a total of thirty-eight pieces), but before that offering, we don't recall REA ever offering even a single example of original artwork from this extremely early Topps issue. An outstanding opportunity to acquire a significant collection of original artwork from this very popular 1950s nonsport set. Total: 19 artworks. Reserve $2,000. Estimate (open). SOLD FOR $9,480