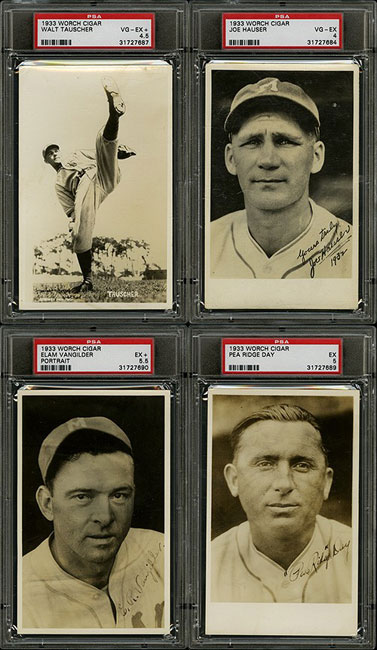 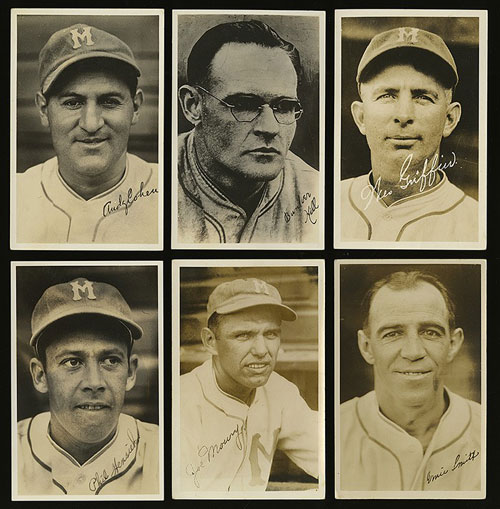 Addendum: Thanks to longtime advanced collector John Esch for providing us with information regarding the eleven cards identified below as 1932 Wheaties. According to John, he acquired a complete set of twenty-four cards, each in its original mailing envelope, which had the Worch Cigar company name printed on it. This information has resulted in the set checklist being updated on OldCardboard.com as a Worch Cigar issue and not a Wheaties issue.

Presented is a collection of fifteen different cards featuring minor leaguers from two early-1930s issues (plus one card depicting a Major Leaguer from a third issue). Though these cards are actually from three different issues, they are all sometimes referred to as "Worch Cigar," due to the similarities in size and style among the sets. The black-and-white cards each measure approximately 5-7/16 x 3-7/16 inches and feature a posed action or portrait image of the player. Four cards are professionally graded and encapsulated by PSA. This collection consists of the following: 1) 1932 Wheaties Minneapolis Millers (11 cards): Similar in design to Worch Cigar, these cards feature portrait images and facsimile signatures of players from the minor league Millers. Though they bear no advertising (the backs are blank), they are classified as Wheaties due to the similarities they share with the 1933 company issue done in the same style. Three cards are graded (misidentified as "Worch Cigar"): Day (EX 5), Hauser (VG-EX 4), and Vangilder (EX+ 5.5). The remaining cards are Cohen, Hill, Girffin, Hensick, Mowry, Rodda, Ruble, and Smith. All grade Vg-Ex to Ex, with Mowry (Fr) and Ruble (Vg) lesser. 2) 1933-1934 Worch Cigar American Association (4 cards): Fenner, Hauser, Harris, and Tauscher (VG-EX+ 4.5). The three ungraded cards present as Ex but grade lesser due to album paper and glue residue on the reverses. 3) 1933 Worch Cigar (1 card): Peel (presents Vg-Ex, but grades lesser due album paper and glue residue on the reverse). This is an extremely attractive collection of sixteen different cards from these distinctive and desirable 1930s issues. Total: 16 cards. Reserve $200. Estimate (open). SOLD FOR $830