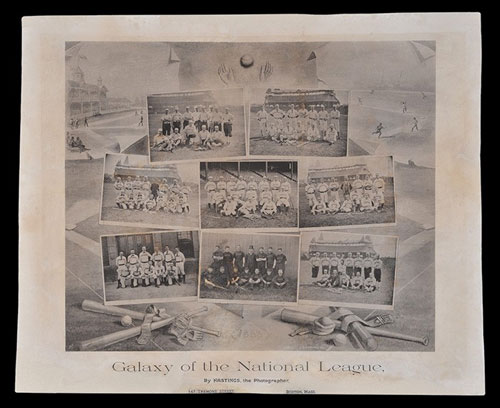 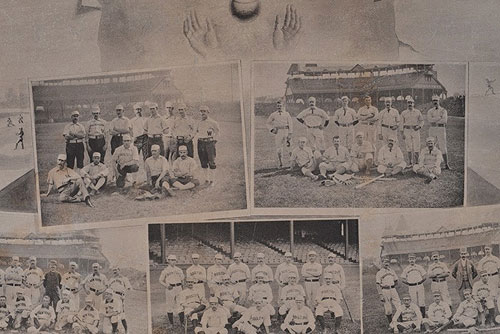 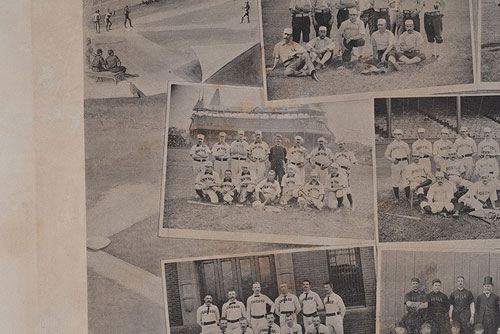 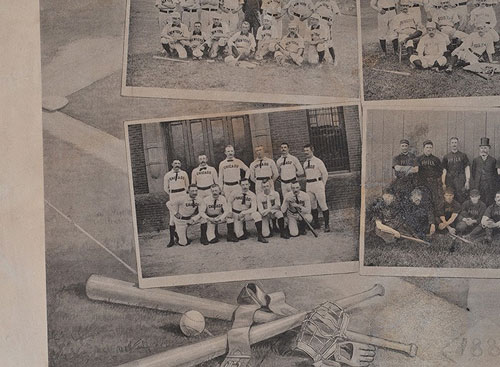 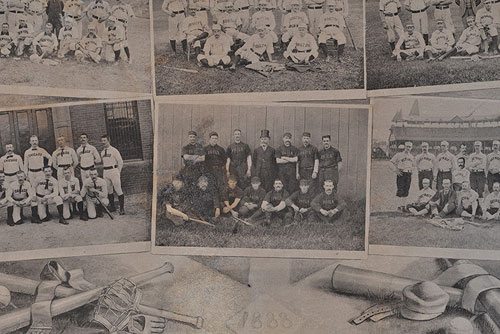 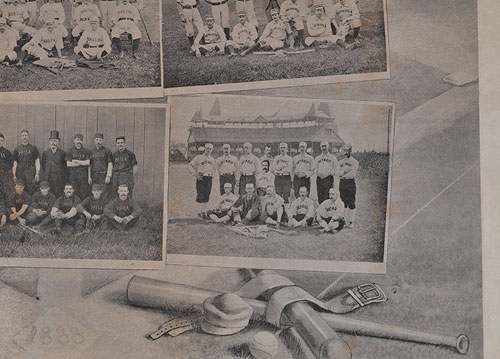 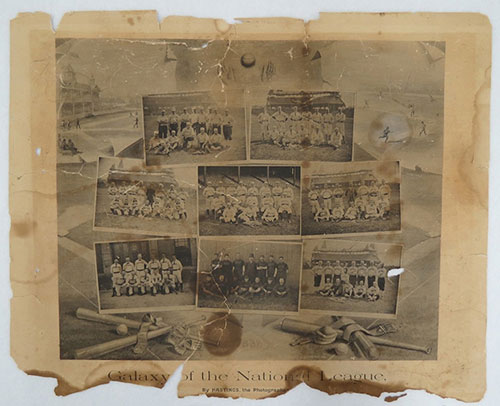 Exceedingly rare baseball display piece, titled "Galaxy of the National League," produced by the renowned Hastings photography studio of Boston, Massachusetts. The attractive design combines beautifully illustrated game-in-progress scenes, as well as various pieces of equipment, together with actual team photos of all eight members of the National League in 1888: New York, Chicago, Philadelphia, Boston, Detroit, Pittsburgh, Indianapolis, and Washington. Each of the team photos measures approximately 5 x 3.5 inches (equivalent in size to a real-photo postcard), which allows for easy identification of most the players present, including Hall of Famers Cap Anson, Sam Thompson, Deacon White, Harry Wright (in top hat, manager of Philadelphia), Mickey Welch, Jim O'Rourke, Montgomery Ward, Buck Ewing, Tim Keefe, Roger Connor, and Pud Galvin. The printed text along the base reads "Galaxy of the National League, By Hastings, the photographer, 147 Tremont Street, Boston, Mass." The year, "1888," is displayed on a rendition of home plate within the body of the piece. This is universally regarded as one of the premier nineteenth-century baseball display pieces. It is also one of the rarest. There are probably fewer than six known examples and we can only recall having seen three others at public auction. Like nearly all of the other few examples we have seen, this piece has benefitted from professional restoration. Originally, the print, which measures an impressive 23 x 19 inches, displayed a number of heavy stains and major tears along the border areas. There was also creasing throughout and one small interior tear (not affecting any of the player images). All of the restoration work was done by Graphic Conservation in Chicago, one of the world's leading conservators of paper. Fortunately, most of the flaws, including the staining and edge tears were easily addressed. It should be noted that the text listing the photographer's address has been recreated and the faces of two of the player images in the Philadelphia team photo remain slightly obscured. Otherwise, the piece displays as Excellent and is on par, or better, in appearance to the few other examples we have seen. For a point of comparison, we have included a photo of the piece prior to restoration on our website. Disclosure per section 13 of REA's terms and conditions: This lot has been consigned from the personal collection of an executive or employee of Robert Edward Auctions (or a relative of an executive or employee). Reserve $5,000. Estimate (open). SOLD FOR $8,888