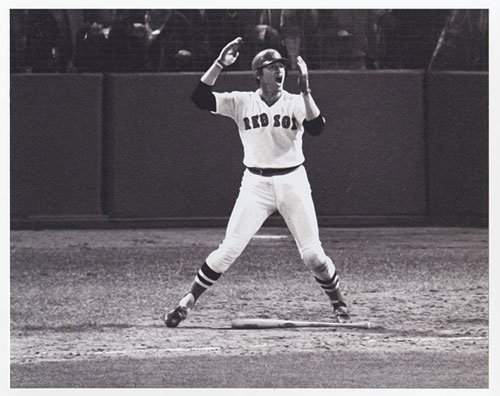 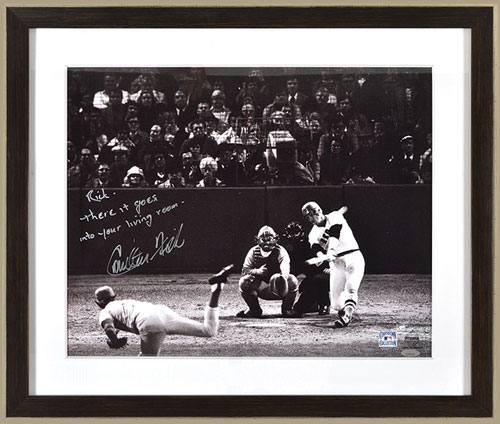 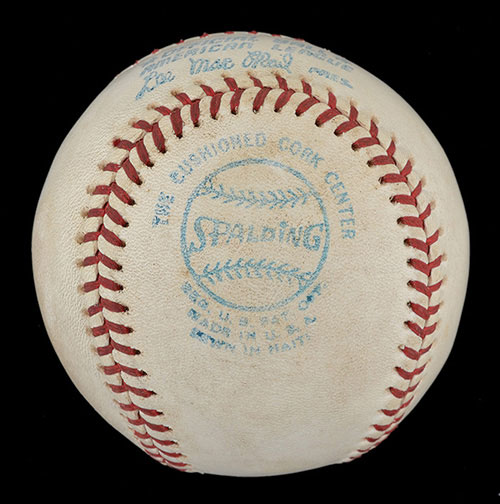 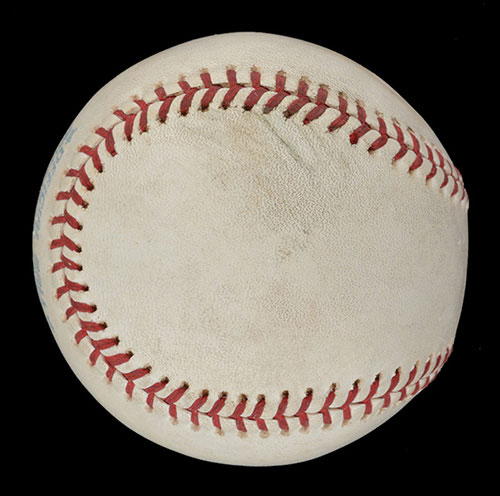 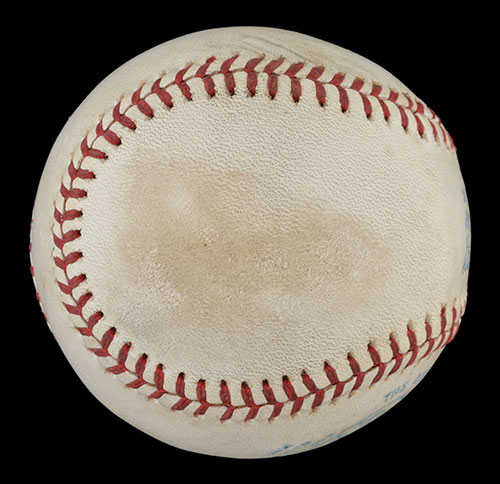 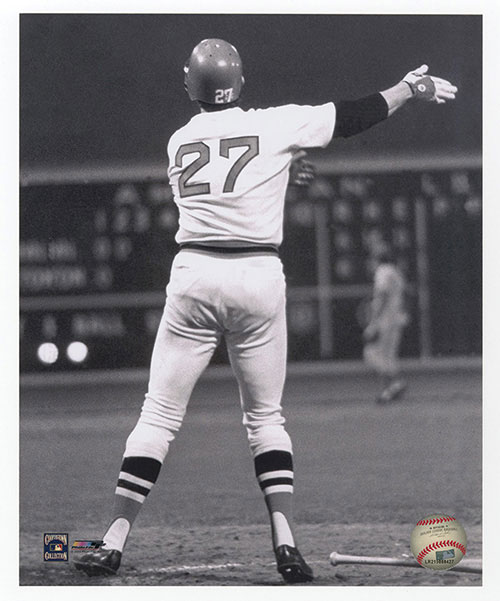 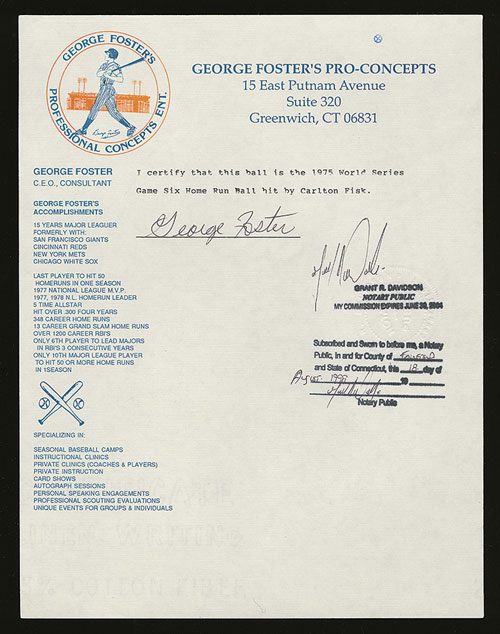 For a complete description of the 1975 Carlton Fisk World Series Game 6 Home Run Ball please go to: http://www.robertedwardauctions.com/auction/2014_spring_preview/2.html The following is an edited (shortened) version: Robert Edward Auctions is proud to offer what, in our estimation, is the most iconic home-run ball in the history of the game: Carlton Fisk's twelfth inning â€œwalk offâ€ home-run ball from Game 6 of the 1975 World Series. For those who experienced the sheer exhilaration of Game 6, Fisk's walk-off blast was the ultimate finale to what can only be described as the most exciting game in baseball history. While the home run itself was historic, the theatrics of the moment, with Fisk, arms overhead, literally willing the ball fair with his body English, left an indelible impression upon the collective consciousness of baseball fans everywhere, making it one of the most memorable moments in all of sports. The physical act of the home run, from the time the ball left the bat to its impact upon the mesh screen of the foul pole, took less than four seconds; but in that brief period of time the entire baseball world stood still. Never before had the question of fair or foul been more exciting, or had more riding upon it. The suspense was palpable as the tiny orb sailed silently upwards, beyond the dizzying height of the â€œgreen monster,â€ until it finally made contact with the foul pole. The only sound those of us watching the game on television heard, and it was almost surreal, as off in the distance somewhere, was the now unforgettable call of NBC announcer Dick Stockton: â€œThere it goes! A long drive, if it stays fair. . . . HOME RUN! . . We will have a Seventh Game in this 1975 World Series.â€ That the Series would continue for one more game seemed to be a gift from the baseball gods to fans everywhere, with Fisk the conduit of their will.

Lost in the jubilant, near riotous, celebration that ensued following Fisk's home run was the ball itself. What happened to it? As one can clearly see in this clip of the home run ( http://m.mlb.com/video/v2650440/greatest-world-series-moments-no-6 ), the ball ricocheted sharply off the mesh screen of the foul pole straight down into the glove of Reds left fielder George Foster, who took it in hand and headed back to the dugout. Foster, realizing the significance of the ball, saved it for nearly twenty-five years before consigning it directly to Leland's' July 9, 1999, auction of sports memorabilia, where it sold for $113,273. (The sale of the ball was a major news story at the time and was reported by all of the wire services and leading papers, including the New York Times .) It was purchased at that sale by our consignor, in whose possession it has remained for the past fifteen years. At the time of the original sale in 1999, George Foster provided a one-page typed-signed notarized letter, on his company's letterhead (George Foster's Pro-Concepts), attesting to the ball's provenance. That letter remains with the ball and is included in the lot.

Also accompanying the ball, and perfect for display with it, is a marvelous 16 x 20-inch black-and-white autographed photo of Fisk hitting his historic Game 6 home run. What truly distinguishes this photo is the fact that Fisk specifically references the offered ball in his witty personalization to our consignor: â€œRick/There it goes/into your living room/Carlton Fisk.â€ Both the inscription and signature are executed in silver paint pen and grade â€œ10.â€ The photo (Nr-Mt) has been matted and framed to total dimensions of (26.5 x 22.5 inches).

So much has been written about Game 6 of the 1975 World Series that the game has risen to almost mythical status today. Fisk's Game 6 home run can normally be found in any of the top-ten countdowns listing baseball's most memorable moments, while Game 6 itself was voted baseball's greatest game ever by the MLB Network. If there is such a place as baseball heaven, then it probably consists of a box seat right behind the first-base dugout at Fenway Park while Game 6 is replayed continuously for all eternity. After Game 6 finally ended, television journalist Clark Booth effused that â€œInstead of playing a seventh game, they should spread tables and checkered tablecloths across the outfields and just have a picnic, a feast to a glorious World Series, and toast one another until dawn.â€ Even the players involved knew that they were taking part in something special at the time. Carlton Fisk said afterwards it was the most emotional game he ever played in, while in the other dugout Pete Rose proclaimed, â€œWhat a game! If this isn't the national pastime. . . . well, it's the best advertisement you could ever have for baseball. . . . it had to be the greatest World Series game in history and Iâ€™m just glad Iâ€™ll be able to say I was in it.â€

The ball itself is an official American League (MacPhail) ball, displaying minor soiling commensurate with its game use. Interestingly, there is a minor area of abrasion on a side panel that was probably the result of its impact with the mesh screen connected to the foul pole. It should also be noted the use of specially manufactured World Series balls did not begin until 1978; therefore, all balls used in World Series prior to that time were either standard American or National League balls (use of an OAL or ONL ball was dependent upon the home team).

As previously mentioned, this is only the second time this ball has ever been offered for sale, publicly or privately, and it may be quite some time before it appears on the market again. Over the past forty years REA has handled countless treasures from baseball's storied past, but only a very few can compare with the offered ball in regard to both historical and cultural significance. This is an item that more rightfully belongs in the Smithsonian Institute than the Baseball Hall of Fame, and one that will represent the crown jewel of any collection in which it resides. Total: 3 items (ball, LOA from George Foster, signed Carlton Fisk photo, plus additional modern photographic prints). LOA from James Spence/JSA (for the Foster and Fisk signatures only). Reserve $100,000. Estimate (open). SOLD FOR $142,200