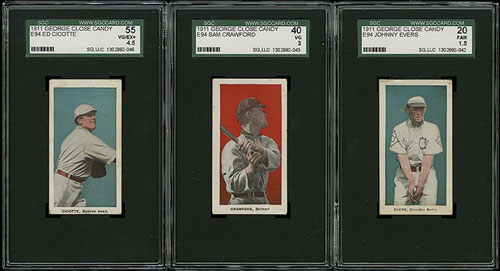 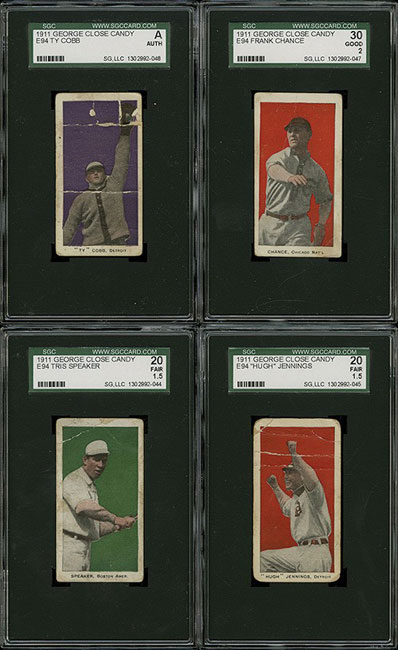 Rare near-complete set of E94 George Close Candy consisting of twenty-six of the thirty cards in the set, highlighted by six Hall of Famers, as well as future "Black Sox" star Ed Cicotte. Missing Lajoie, McGraw, Wagner, and Young for completion. (The Wagner from this set was present but is being offered individually as a separate lot in this auction because it features a rare â€œBlomeâ€™s Candyâ€ advertising overprint.) This 30-card set was issued in 1911 by the George Close Co. of Cambridge, Massachusetts. Advanced collectors of "E" cards will immediately recognize the caramel-card set designated as "E94" as a thorn in their sides. While at a glance E94s may be easily confused with other caramel-card sets of the era (E93 and E98 specifically), they are an entirely different set, even though they use many of the same subjects and poses. Of the three previously mentioned sets, E94s are the most difficult, and we have only ever offered one complete set. The set is comprised almost exclusively of Hall of Famers and stars. We have selected seven cards to be graded by SGC. SGC Grading Composite: One VG/EX+ 55: Cicotte (Black Sox). One VG 40: Crawford (HOF). One GOOD 30: Chance (HOF). Three FAIR 20: Evers (HOF), Jennings (HOF), and Speaker (HOF). One Authentic: Cobb (HOF). The balance of the cards grade grade as follows: four Vg, eight Gd, and seven Pr-Fr (including one trimmed). These cards are in very attractive but circulated condition with bright colors and some technical faults that cause them to grade modestly. This is typical for caramel cards, which of course were issued with candy, one card per pack, and which tend to survive in lesser condition than their more common tobacco-card counterparts. The equivalent SMR value for just the seven graded cards (not including the Cobb graded â€œAuthenticâ€ and factoring in the four half-grades at the lower whole-grade level and not including the additional nineteen cards!) is $3,065. This set (minus four) has been consigned directly from the family of legendary pioneer collector Paul Pollard. Total: 26 cards. Reserve $1,000. Estimate $2,500+. SOLD FOR $7,110