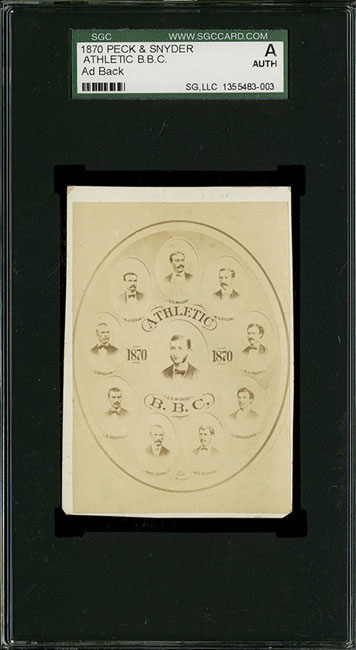 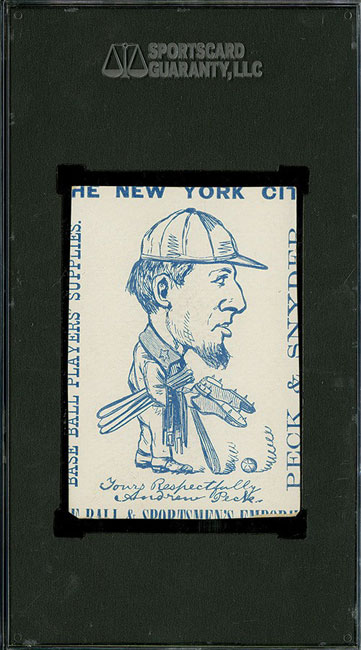 Extremely rare Peck & Snyder team composite trade card featuring portraits of the 1870 Philadelphia Athletics. This card originates from an extraordinary new find of three circa 1870 baseball-team cards, all of which were found in a nineteenth-century scrapbook and are offered in this auction. We have seen this composite image of the 1870 Athletics BBC in CDV form previously, but have never before seen a Peck & Snyder trade card in this style. It is obviously extremely rare! Though we had never seen or heard of it, we were surprised to find that the 1870 Athletics BBC is actually listed in The Standard Catalog in the short checklist of trade cards issued by Peck & Snyder between 1868 and 1870. Each of the Peck & Snyder trade cards features a photograph of a team on the front and advertising for Peck & Snyder Sporting Goods Emporium on the reverse. The Brooklyn Atlantics, Chicago White Stockings, Cincinnati Red Stockings, New York Mutuals, and Philadelphia Athletics appear to represent the complete checklist of all teams known to have been featured on trade cards issued by Peck & Snyder. The 1870 Athletics BBC team is the only card among these featuring pictures of the players in composite form. (All the others are traditional posed team photos).

The 1870 Athletics were one of the top teams of the era before the formation of the National Association in 1871. The card features ten identified player portraits in ovals, including A. J. Reach (at 11:00). In addition to his later prominence as baseball executive and entrepreneur, Al Reach was one of the top players in the game in the 1860s and early 1870s, and is credited by many as being the first professional baseball player. Also featured on this team is Dickie McBride (center; perhaps the greatest pitcher of the National Association), Harry Schaefer, George Bechtel, Thomas Berry, Count Sensenderfer, Fergy Malone, Wes Fisler, Tom Pratt, and John Radcliff. This is, with few exceptions, the very same team that won the championship of the National Association in the 1871 inaugural season. The photo quality of the portraits on the offered example is bold and flawless. Name identifications are all perfect and bold (though the type is very small, as made). The outstanding contrast is noteworthy as this is not always the case with 1870-era team cards and CDVs on which contrast can vary dramatically.

This trade card has been neatly trimmed to dimensions of 2-1/2 by 3-5/8 inches, similar in nature to the other two trade cards from this find. (Trade cards were often trimmed down to the size of CDVs.) The reverse features advertising for Peck & Snyder's "Base Ball and Sportsman's Emporium" ("126 Nassau Street, New York"), a leading retailer of baseball supplies at that time. Illustrated in striking blue color, the advertisement is flawless (except for where it has been naturally affected as a result of the trimming) with only a small wrinkle visible along the left edge. Without respect to the trimming, this trade card has an overall Excellent appearance. As noted earlier, this piece is new to the hobby and was just recently discovered by our consignor along with two other 1870-era trade cards featuring the 1868 Brooklyn Atlantics and 1869 Cincinnati Red Stockings (each presented in this auction as its own lot). This is a significant newly discovery example of one of the most important team cards of the era, and one that would be a welcome addition to any advanced collection of nineteenth-century cards. It is also one of the very few cards ever produced featuring Al Reach as a player. Encapsulated "Authentic" by SGC. Reserve $1,000. Estimate (open). SOLD FOR $4,740