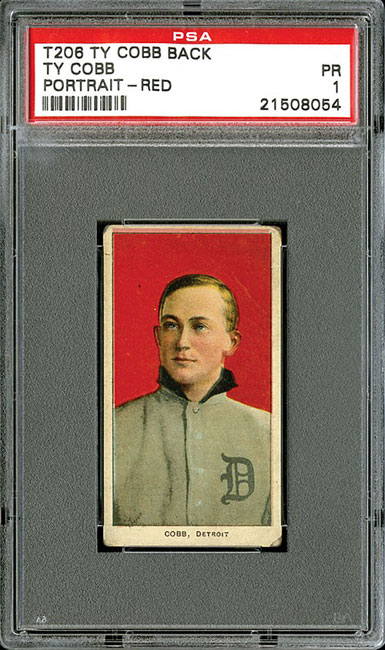 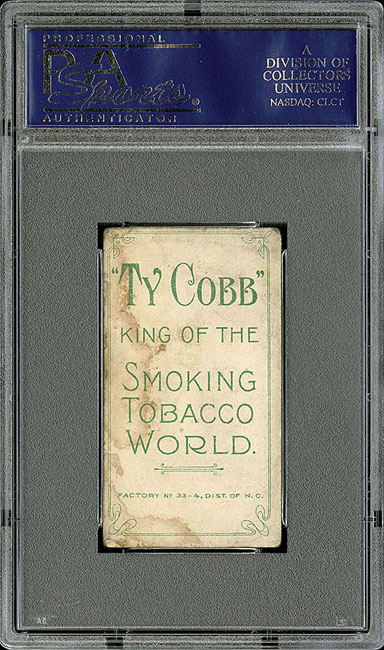 Graded PR 1 by PSA (submitted by REA). Presented is an extraordinary example of one of card collecting's most legendary rarities: The T206 Ty Cobb with "Ty Cobb" back. This is one of only approximately thirteen examples known to exist. This card is from one of card collecting's most exciting finds of years past: the legendary find of five T206 Ty Cobb with "Ty Cobb" back cards discovered in Georgia in 1997. Those five cards were found preserved between the pages of a book by the great-grandson of the original owner, John W. Hudson, who operated a mercantile store in Reynolds, Georgia, from around the turn of the century until 1917. It is unknown how he came to possess the Ty Cobb cards. One thing is certain, though, and that is that Ty Cobb was revered as one of Georgia's own, and it is not a coincidence that this card originates from his home state. The five John Hudson Ty Cobb with "Ty Cobb" back cards were all auctioned in the same sale by Robert Edward Auctions in June 1997. The example offered here was purchased by our consignor directly from the auction at that time (appearing as Lot #15 and realizing a price of $22,224), and it has remained in his sole possession as part of his advanced card collection until now.

This is an outstanding example of this legendary card. Because so few Ty Cobb with "Ty Cobb" back cards exist, it is easy to look up images of most other known examples, almost all of which have been sold at auction over the years. This card, in all of the many ways that we believe are most important to collectors in assessing this important rarity, is far better than suggested by its modest PSA-assigned grade. We did not expect a PSA 1 when we submitted the card, and we believe that it would not look out of place in a holder grading slightly higher. Whatever the technical grade, it is a beautiful card. It is bright and clean, with no dirt or smudges or writing (all flaws that affect other examples). Two light, one-inch long diagonal corner creases, one each in the upper and bottom right corners, do not have a great impact on the front of the card as they are distant from the bold, crisp portrait. There is some extremely light wrinkling on the glossy coating in the areas of the two creases, visible when held at just the right angle in bright light. The portrait and the surface of the card appears virtually flawless when looked at head on! Bold colors with the registration shifted slightly to the top (not significant, but noticeable). The corners display even wear with minor fraying to the right two corners. The reverse displays some tobacco staining along the left and bottom edges and light soiling along the top and right edges. There is no paper loss. The important advertisement is boldly printed in green ink, which is of course of monumental significance on an ideal Ty Cobb card with "Ty Cobb" Tobacco back.

While a T206 Ty Cobb with "Ty Cobb" back is one of tobacco-card collecting's greatest prizes in any grade (and most are in low grade), this is an particularly attractive card that, as can easily be seen, compares very favorably to several other of the few known examples. Exactly how these cards were distributed has always remained one of the great mysteries of the card-collecting world. The T206 set is the premier set of the era and the single most significant and widely collected of all baseball-card sets. The T206 Ty Cobb with "Ty Cobb" back card is, of course, actually considerably rarer than the famous Honus Wagner card from the same set (approximately sixty-five T206 Honus Wagners are known to exist as compared to approximately thirteen Ty Cobb with "Ty Cobb" back examples). A strong case can be made that the T206 Ty Cobb with "Ty Cobb" back should be assigned its own catalog number as a "one-card set," but due to its great similarity to the T206 series, this card has always been considered a T206. This is an exceptional example with tremendous eye-appeal of one of card collecting's most significant rarities. Reserve $25,000. Estimate $50,000++. SOLD FOR $154,050