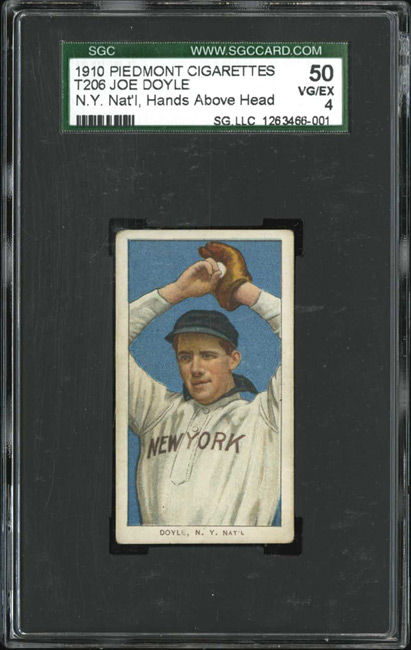 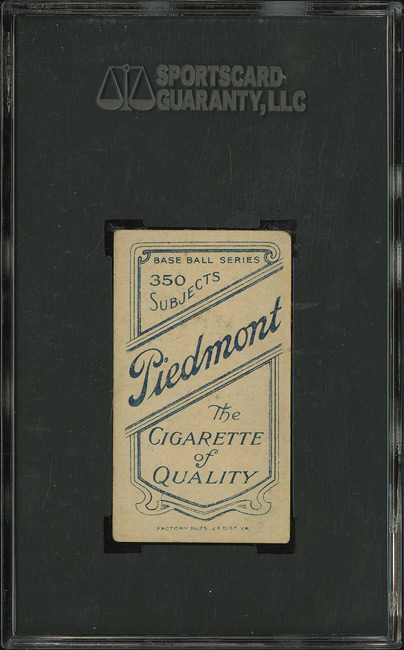 Presented is the most exceptional and highest-graded example of the rare T206 Doyle, N. Y. Nat'l (hands over head) error card in the collecting world! Graded and encapsulated VG/EX 50 by SGC. This card is the real deal! It is also extremely significant as it is the legendary Charlie Conlon T206 Doyle example, which was the first example of this rare card ever sold by REA when it appeared in the Spring 2009 auction (realizing $329,000).

The T206 Doyle error card is by far the rarest card in the entire T206 set. It is more than ten times rarer than the T206 Honus Wagner. The rare T206 Doyle was unchecklisted and completely unknown until the 1970s, when Larry Fritsch, while sorting through thousands of T206s, first discovered it. No one had ever noticed the card before, which is understandable given its great rarity. Fritsch kept his discovery as quiet as he could, but naturally drew attention to the card when for years he advertised extensively to purchase any and all T206 Joe Doyle hands-over-head cards in the hopes of finding additional examples.

For many years, Charlie Conlon and Larry Fritsch were the only collectors known to have this extreme T206 rarity. Over the past twenty years, several additional examples have allegedly been discovered, though the authenticity of some of the others is highly questionable. To the best of our knowledge, at most only eight authentic rare Doyle cards exist: three graded by PSA (two VG 3 and one GOOD 2), two ungraded (presumed authentic), one by SGC (the offered VG/EX 50), one by BVG (VG-EX 4, previously SGC "Authentic"), and one ungraded in the collection of Senator Richard B. Russell housed at the University of Georgia. Though the PSA Population Report may suggest otherwise, we are extremely confident that errors are responsible for this, and believe the offered example is the finest and highest-ever graded authentic example of the rare T206 Doyle error card.

At a glance, without thinking about what the card is and why it is rare, we could see a collector looking at the rare T206 Doyle and saying, "OK, so the identification text at the bottom of the card reads "Doyle, NY Nat'l" as opposed to "Doyle, N. Y." Who cares? So a few letters were left off. So what?

But these letters did not just mysteriously "disappear" from the normally T206 Doyle cards. The "Nat'l" was intentionally removed from the plate by the printer to correct an error. An important fundamental point to understanding the nature and significance of the rare T206 Doyle is that the rarity of the NY Nat'l variety is due to the printer's REMOVAL of the "Nat'l" - not the adding of it. The image on the hands-over-head Doyle pose is Joe Doyle of the New York Americans. But when the card was first printed, Joe Doyle, as seen on the rare error card, was listed as with the New York Nationals. This was an error. And it was actually a pretty understandable error: Larry Doyle played for the New York Nationals; Joe Doyle played for the New York Americans. The manufacturer of the T206 set got its Doyles mixed up. This is the cause of the rare Doyle error!

When the printer discovered very early in the print run that an error had been made, that the image on this card was Joe Doyle of the New York Americans (as opposed to Larry Doyle of the New York Nationals), rather than correcting the league designation on the card (changing it from "Nat'l" to "Amer."), the league designation was simply removed entirely from the printing plate. This was probably just easier to do than to change "Nat'l" to "Amer." So by REMOVING the "Nat'l" they corrected the misidentification of Joe Doyle (of the NY Americans) as Larry Doyle of the NY Nationals, because both Doyles were with New York teams (just with different New York teams). This was done very early in the print run. Thus almost all known Doyle hands-over-head pitching pose cards in the T206 set are identified with just "N.Y.," as the error cards identifying the league designation as "Nat'l" were corrected almost immediately. This is what explains the great rarity of the "NY Nat'l" variation.

The offered example is simply stunning, with perfect centering, bright and bold colors, no creases, and light, even wear to the corners. The deep blue background surrounds the crisp and perfectly registered image of Doyle with his hands above his head. The Piedmont 350 reverse is boldly printed and perfectly centered. We should note that we showed the card to PSA at the request of the consignor, who was interested in crossing the card into a PSA VG-EX 4 holder (he would not accept a lower grade) prior to auction. PSA was excited by the prospect of grading the card and evaluated it in accordance with their grading standards. After close inspection of the reverse by the PSA graders, they were of the opinion that there was faint evidence of possible album removal, which would cause the card to grade very slightly lower than VG-EX based on their standards. Naturally, grading is subjective, and PSA and SGC can and do have slightly different standards and interpretations. We at REA believe that the card is an extraordinarily solid VG/EX example and is entirely deserving of its assigned grade.

For many years the great rarities of the T206 set were "Wagner, Plank, Magie" and these three cards were universally referred to by T206 collectors as "The Big 3." Since the discovery of the rare "Doyle, N.Y. Nat'l," the term representing the extreme rarities of the T206 set has been renamed "The Big 4," and this phrase is commonly used to refer to the cards that are not expected to be included with a T206 set that is otherwise complete. The fame and value of the original "Big 3" are testaments both to their rarity and the unrivaled popularity of the T206 set. The Doyle, however, is actually in its own league in terms of rarity. It is a virtually impossible-to-obtain T206 rarity unlike any other.

In the last twenty years, there have only been five authentic T206 Doyle cards sold in catalog auctions: The first was a PSA GOOD 2 example that sold for $178,598 in August 2000, and a second example graded PSA VG 3 in August 2003 for $64,099. REA offered the legendary Conlon example in May 2009, which sold for $329,000, and then in May 2012 offered the Joe Pelaez example graded PSA VG 3 (a different card than the August 2003 example), which realized $414,750. In February 2010, between the two REA sales, Goodwin Auctions sold an example graded "Authentic" by SGC (the same card now encapsulated as VG-EX 4 by BVG) for $186,155. It is a great privilege for REA to have the opportunity to offer this card and properly document the significance of the rare T206 Doyle. We hope we have done justice to one of card collecting's greatest and most elusive rarities, explaining the nature of the card, and properly recognizing its great significance as by far the rarest card in the famous T206 set. Res.$100,000. Est.(open)