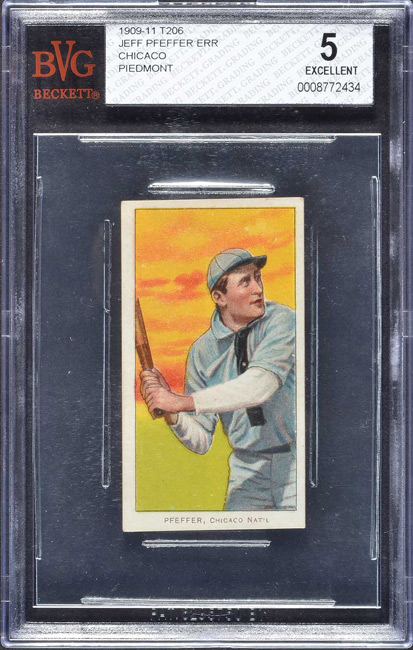 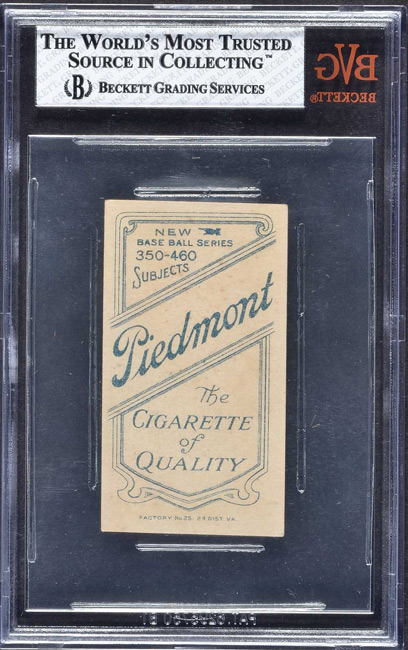 Graded EX 5 by BVG. Superb example of Jeff Pfeffer of the Chicago Cubs from the legendary T206 White Border series. Well centered, with brilliant colors, strong corners, and a clean Piedmont reverse. The offered card is especially significant for the printing error in the nameplate underneath the image, which has resulted in the team name reading "Chicaco." While some collectors have quietly been aware of the existence of this variation, it has just recently been recognized by Beckett and added to its advanced vintage-card checklist. With that, the card joins several other notable caption variations, including the long well-known “Nodgrass” variation and the rare "Murr'y" variation. As collectors have become more sophisticated, there has been a growing appreciation for all great rarities associated with the landmark T206 set, including these extreme rarities that were not even known to exist until recent years and have subsequently been recognized as legitimate variations. Some collectors are quick to dismiss these variations because the nature of the variation, which was apparently caused by a printing plate defect affecting only a very limited print run, is subtle. In the future we have no idea if the Pfeffer "Chicaco" card will be considered an obscure footnote to the T206 set or celebrated as one of the T206 set's extremely valuable rarities. In either case, it is certainly an interesting card to T206 scholars. The T206 set, affectionately known as "The Monster," is the most popular of all 1910-era sets and is still yielding new and exciting discoveries more than a century after its production. Incredible research is conducted on a daily basis into the intricacies of this legendary set. This is a fascinating printing anomaly that we believe will greatly interest collectors of the various nuances found within this iconic set.  Reserve $200. Estimate (open).