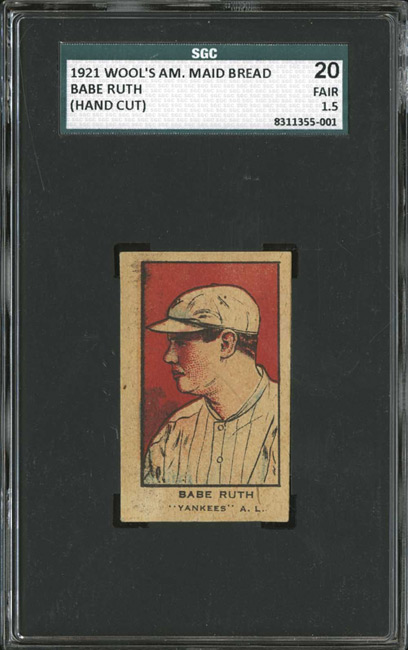 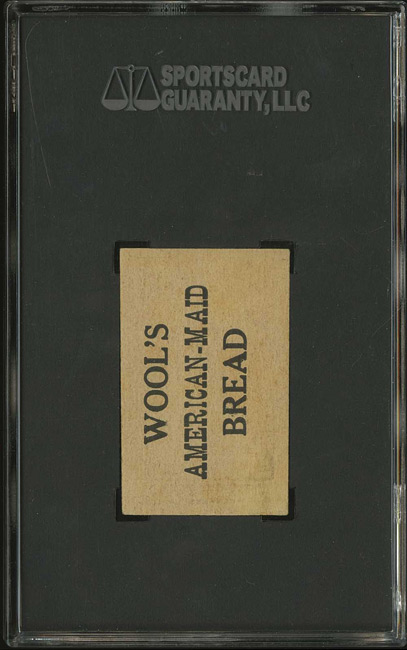 This is an extraordinary rarity! There were no doubt others produced in 1921, but this is the only survivor we have ever seen or heard of. Presented is an extremely rare Wool's American Maid Bread card of New York Yankees Hall of Famer Babe Ruth! One of the rarest sample cards of the era, over the years we have seen examples of three other subjects from this set (Baker, Cobb, and Bancroft) but this is the first Babe Ruth. The front of the card features the exact same image as the W551 strip-card issue, also produced in 1921, but features a bold black overprint promoting the bread product on the reverse. "Overprinting" is a term commonly used to refer to the practice of a company taking cards already printed (in some cases even issued by another manufacturer) and adding advertising, in the form of printing or ink stamp, to allow the cards to function as its own advertising vehicle. This is also often a way for the card producer to create a greater demand for their product. The many different printed advertising backs of the 1916 M101-4 and M101-5 issues and the many different overprinted stamp backs of the E94 caramel issues are perhaps the most well known examples of this practice among vintage card collectors. The use of strip cards in this manner is not unique to Wool's American Maid Bread. In 1923, for example, the Frank H. Fleer Corporation of Philadelphia (yes, the very same Fleer corporation that decades later became one of the biggest manufacturers of baseball cards!) had W515 strip cards printed with its advertising produced for distribution with every five-cent package of Fleer candy. The 1923 Fleer cards are very rare; the 1921 Wool's American Maid Bread cards are even rarer!

The advertising on this card is an extraordinarily bold and flawless black and is a perfect strike that really stands out, which of course is ideal for any overprint example. Not much is known about the Wool's American Maid Bread issue; the Standard Catalog refers to the cards only as a "seldom-seen variation of the W551 strip-card set [which] appears to have been locally overprinted at an unknown location for use as a bread purchase premium." A set is presumed to be complete at ten cards as only ten baseball players were in the W551 set, which featured other popular athletes and entertainers of the day. Graded FAIR 20 by SGC due to a very faint stray pencil mark on Ruth's neck, the card otherwise presents as Vg to Vg-Ex, with a tiny wrinkle visible in the area of the mark and a small surface imperfection along the bottom border. It is bright and clean, with a flawless image, bold colors, and strong corners. The reverse, as mentioned, is bold and clean. While as noted, this is the first Wool's American Maid Bread card example of Ruth that we have ever seen or handled, a Dave Bancroft from this issue (which survived with the Ruth) appears separately in this auction. Value is always subjective, but in this case, because this card is so rare (potentially even unique as this is the only example ever evaluated by SGC or PSA), there is no consensus on its value. We are confident the auction process will provide clarity. This is a tremendous example of this very rare early 1920s Babe Ruth card that would be a worthy addition to even the most advanced collection.  Reserve $500. Estimate (open).