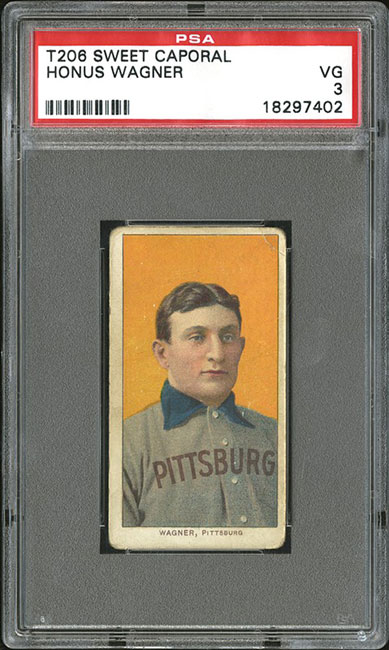 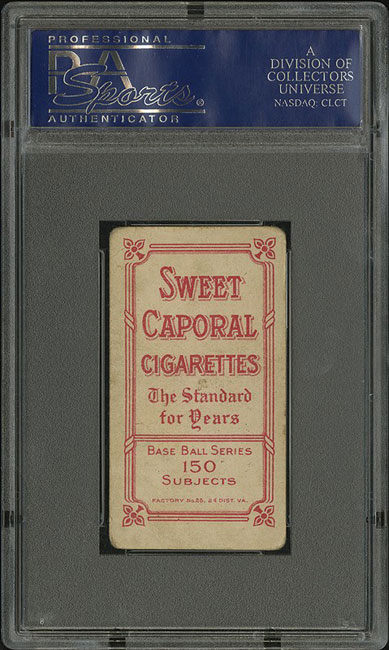 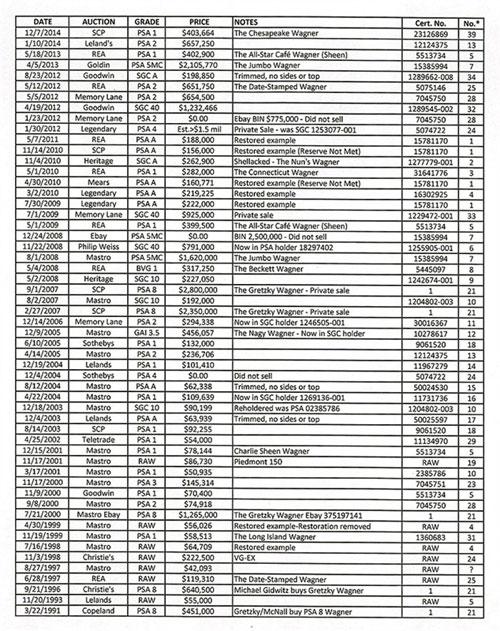 Every T206 Wagner naturally has a great story, sharing the Wagner legend that is now part of classic American folklore, and every Wagner also has an additional story relating to its provenance. Collectors have always been fascinated with all aspects of the history of Wagners: how they were discovered, where they have been purchased, when, for how much, where they have been, how they have happened to survive. Sometimes there are more questions than answers, and sometimes a Wagner is special in ways that no other examples share.

Wagners that have great stories include "The Gretzky-McNall Wagner" (the most valuable and famous card in the world), "The All-Star Cafe Wagner" (when owned by Charlie Sheen, displayed at the All-Star Cafe in New York, famously stolen by employees and replaced with a color Xerox, later recovered by the FBI); "The Nun's Wagner" (a very low-grade, trimmed, and shellacked T206 Wagner donated to an order of Roman Catholic Nuns, who were shocked to discover its great value; the $262,000 the sale of the card realized in 2010 was put to great use by the order). There is also "The Jumbo Wagner" (a T206 Wagner with very large borders), "The Burdick Wagner" ("Father of Card Collecting" Jefferson Burdick's very own example, donated to the Metropolitan Museum of Art), "The Halper Cooperstown Gift Wagner" (in the 1980s when famous collector Barry Halper learned that the Hall of Fame did not have a Wagner, he gave them his duplicate as a gift!); "The Diecut Wagner" (the background was completely cut away on this card, leaving only the portrait and bottom border; REA sold this card in 1997); "The Nagy Wagner" (a very strong example once owned by legendary pioneer collector Frank Nagy); "The Restored Wagner;" and even "The Restored and Unrestored Wagner." We're sure there are others that are deserving of special distinction and mean no disrespect by not naming them.

Robert Edward Auctions is extremely pleased to present "The Oceanside Wagner," one of the finest examples of the legendary T206 Wagner in existence. This exceptional card was entirely unknown to the modern collecting world for nearly a century until it was discovered in the basement of an Oceanside, New York, home in 2008 alongside hundreds of other 1910-era tobacco cards. The entire collection of cards, carefully saved for generations in the family of the original owner, was presented as part of a New York-based estate auction, where the T206 Wagner naturally "stole the show," realizing a then-record price of $791,000. At the time of the sale, the card was graded by SGC, but in the years since, the buyer opted to have it graded by PSA to match the balance of his impressive collection. (SGC was alerted to this fact and adjusted their population report accordingly so as to not double-count a card of this importance.) The offered card has the incredible distinction of being one of the few T206 Wagner examples to have such a short, but concrete, provenance and chain of custody. Many of the known examples have circulated within the hobby for decades and have changed hands several times. "The Oceanside Wagner" has had only two owners in its entire 106-year existence! This is a remarkable and desirable trait that few other T206 Wagners can claim. The new buyer will be only the third owner ever of this incredible card!

The Card: Graded VG 3 by PSA. This very attractive T206 Honus Wagner possesses virtually every quality highly desired by collectors. It has vibrant colors, a bright orange background, and a crisp, bold, and entirely flawless portrait. The card is well centered (very slightly to the right), and the corners show even wear, with only a single small crease present on the entire card, placed unobtrusively in the top right corner and barely breaking through to the reverse. The advertisement for Sweet Caporal Cigarettes printed on the reverse is perfectly centered and clean.

This is a particularly strong T206 Wagner that far exceeds the condition and visual appeal usually found with T206 Wagners. This is very easily seen just by looking at the card, but it is further confirmed when one evaluates the known T206 Wagner population as documented by the PSA and SGC population reports. The offered card is one of only four examples graded at this level by PSA with three additional VG examples graded by SGC. Only four examples grade higher (all by PSA): one NM-MT 8, one EX 5, one EX 5 (MC), and one VG-EX 4. By any measure, this is one of the highest-grade examples of the T206 Wagner in existence! Of the forty-six T206 Wagners listed on the combined PSA and SGC population reports (which may be a bit high as several examples have been crossed between the two companies over the years), twenty-three grade Poor or "Authentic," one grades Fair, and eleven grade Good.

A grade of VG is exceptional for a T206 Wagner, and the visual appeal of the offered example places it at or near the top of the already exclusive company it keeps. This is a phenomenal-looking card in all respects that elicits a positive and awed response from everyone who sees it. The colors are noticeably brighter, fresher, and bolder than virtually every other T206 Wagner in existence. The image is perfect, and it shows just enough honest wear to give it character but not serve as a distraction in any way. Its provenance as an original-owner example introduced to the hobby in 2008, purchased by a collector (our consignor) at public auction, and kept in his sole possession until now, adds a nearly unparalleled documented history to this card that defines the next owner as only the third unique owner of this card in its history. Valuing Wagners is very subjective. That's for the bidders to decide. History has shown that the T206 Wagner has always been a tremendous store of value, and has gradually climbed in price for decades, commanding ever-impressive sums in all grades. Higher-grade examples are few and far between. Whatever the auction result, whether it brings far more (as we believe it deserves to), or less, than its 2008 auction selling price, it is a great privilege and honor for us to be chosen to present this card, the finest example of the legendary T206 Wagner ever auctioned by Robert Edward Auctions, and one of the finest examples in existence of card collecting's greatest treasure.Â  Reserve $100,000. Estimate (open).