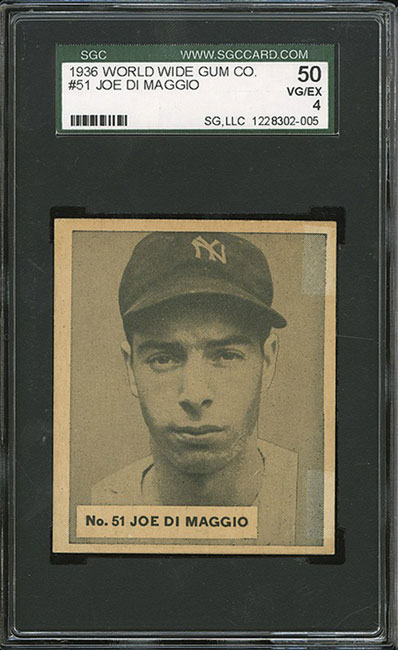 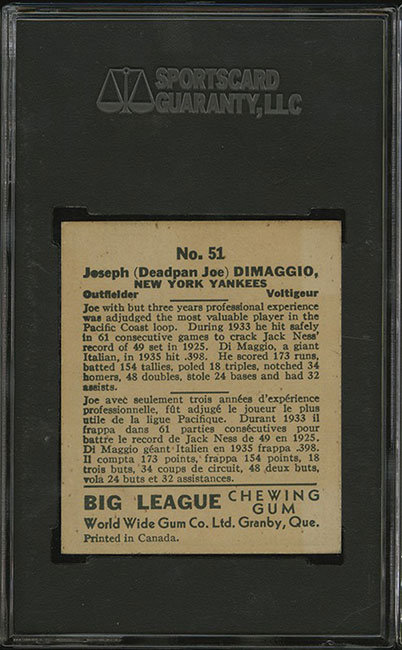 Graded VG/EX 50 by SGC. Presented is a superb example of Joe DiMaggio's Major League rookie card from this rare, unusual, and very substantial 1930s Canadian Goudey issue. This is one of the most classic and sought-after of all Joe DiMaggio cards. We have always been particularly amused at the use of DiMaggio's long forgotten nickname ("Deadpan Joe"), which appears prominently on the back of this card. He earned this nickname during his record-setting hitting streaks in the PCL, but it didn't follow him to the Majors, except here, on DiMaggio's first Big League World Wide Gum card. The card displays a crisp, perfectly focused image, and four square corners displaying only the lightest touches of even wear. The card is centered very slightly to the bottom right. The card displays light, even toning on the front, with what appears to be extremely minor discoloration (note: this is actually just a lack of toning relating to storage long ago) in two small areas along the right border. This may be all that accounts for the modest assigned grade despite the card's otherwise superb Ex to Ex-Mt appearance. This is a very conservatively graded card! The reverse is clean with bold black text printed in both English and French. One of the finest examples of this important card we have ever offered, this is an exceptionally attractive example of one of Joe DiMaggio's most classic cards, dating from his rookie season with the New York Yankees. Reserve $1,500. Estimate $3,000++. SOLD FOR $6,600