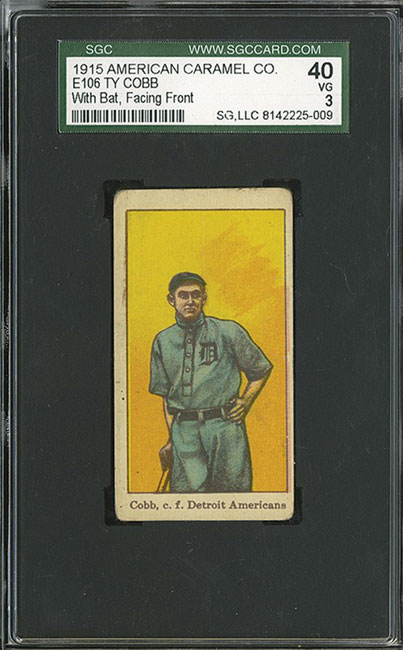 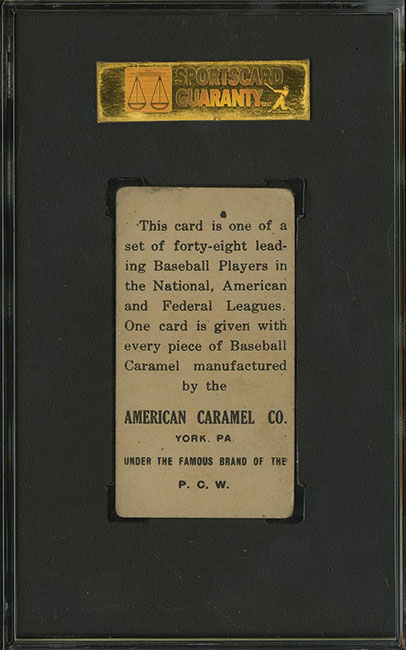 Graded VG 40 by SGC. Extraordinary E106 example of Detroit Tigers Hall of Famer Ty Cobb (with bat, facing front variation). The exceptionally rare 1915 E106 American Caramel issue shares designs with several other closely related candy issues (Croft's Candy, Nadja Caramels, Dockman & Sons, etc.) from the same era. These cards have glossy surfaces, which are very susceptible to cracking. The offered example of Cobb is clean both front and back, with even rounding to the corners, vibrant colors, a crisp image, and centered to the right. The back is also bright and clean, with bold text and a very tiny surface wrinkle in the top right. Caramel cards in general are much rarer than tobacco cards of the era. Because they were issued with caramels, one card per package, and sold to children (as opposed to being sold to adults with tobacco), they also tend to survive in a much lower grade. In addition to being issued a few years later than most caramel cards, E106 American Caramel Company cards are considerably rarer than most traditional "E" cards. This is an exceptional example of the legendary Ty Cobb from this extremely rare, early twentieth-century candy issue. Reserve $1,000. Estimate $2,500+. SOLD FOR $3,300