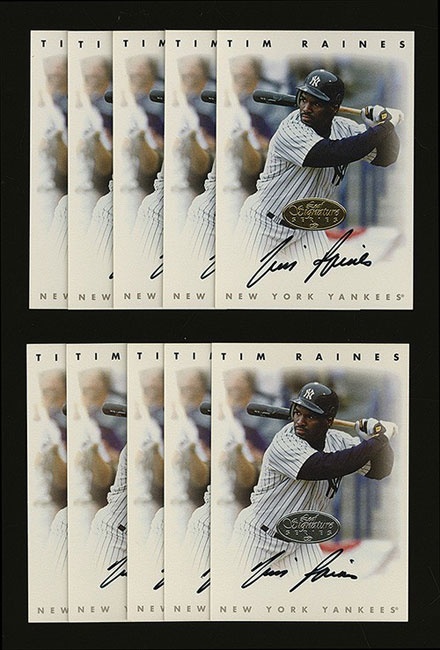 Offered here is an extraordinarily unusual lot: A collection of 1,547 unissued Tim Raines 1996 Leaf Signature Series cards, including 1,342 signed examples. All of these cards were shipped to Raines in 1996 for him to sign and return to the company. Raines signed most of the cards, but, for reasons unknown to us, he never sent the cards back to the company (as a result, no Tim Raines 1996 Leaf Signature Series cards were ever formally issued). At the end of the season Raines gave all of the cards, both signed and unsigned to a Yankee clubhouse employee, who, in turn, later sold them to our consignor. Aside from approximately fifteen signed cards, which our consignor sold a few years ago (some of which were offered on eBay), no other Tim Raines signed 1996 Leaf Signature cards have ever entered the hobby. This is the mother lode! This collection is comprised of 423 signed Gold Signature cards, 919 signed Silver Signature cards, and 205 unsigned Bronze Signature cards. All of the autographed cards have been signed by Raines in black marker on the front, with each of the signatures grading "10." The cards all remain in Near Mint condition overall. Included with the cards is all of the original company paperwork sent to Raines at the time, including the instructions on how to sign the cards, an affidavit of authenticity for Raines to sign and have notarized, tax forms, and a return shipping label. Total: 1,547 cards (1,342 signed and 205 unsigned). LOA from James Spence/JSA. Reserve $1,000. Estimate (open). SOLD FOR $5,100