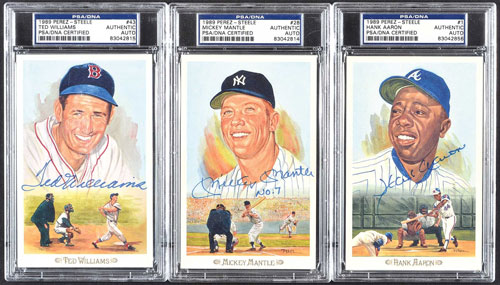 1989 Complete Autographed Perez-Steele Celebration Set - All 41 of the Possible Cards - Each Encapsulated by PSA/DNA!

This 1989 Perez-Steele Autographed Celebration set is complete with signed examples for all forty-one cards that could have possibly been signed in the forty-four card set, each of which has been encapsulated by PSA/DNA (all of the signatures are certified as "Authentic"). The remaining three cards in the set (Gomez, Terry, and J. Johnson) could not have been signed because each of the respective players passed away during the production of the set. The Perez-Steele Celebration set was issued in 1989 (with no updates) to commemorate the 50th anniversary of the Baseball Hall of Fame and the 10th anniversary of the Perez-Steele Galleries. Issued in cooperation with the Hall of Fame, it is one of the most beautifully designed and elaborately produced sets issued in modern times. The issue was limited to 10,000 sets (which immediately sold out) and featured cards for forty-four Hall of Famers who were still living at the time the set was conceived (in consideration of autograph collectors), plus a checklist. The art is painted in the style of the W. S. Kimball tobacco set of 1888. The offered set is #05686; however, the signed cards for Jocko Conlan, Roy Campanella, and Al Lopez are from different sets (the original unsigned examples from set #05686 are included here). The forty-one signed cards in this set (representing every possible signed card) are Aaron, Aparicio, Banks, Bell, Bench, Berra, Boudreau, Campanella, Chandler, Conlan, Dandridge, Dickey, Doerr, Ferrell, Gehringer, Herman, Hunter, Irvin, Kaline, Kell, Killebrew, Kiner, Lemon, Leonard, Lopez, Mantle, Marichal, Mathews, McCovey, Mize, Musial, Reese, B. Robinson, Sewell, Slaughter, Snider, Spahn, Stargell, B. Williams, T. Williams, and Yastrzemski. All of the signatures are boldly scripted in blue or black Sharpie on the front, grading "10," with the exception of Campanella (black Sharpie). Near Mint to Mint condition overall. Auction LOA from James Spence/JSA. Reserve $1,000. Estimate $3,000++.