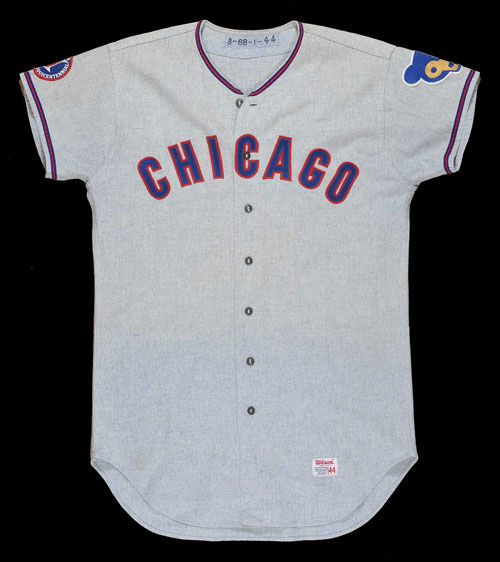 Chicago Cubs road jersey worn by coach Joe Becker in 1968. The grey flannel jersey is lettered "Chicago" across the front and features the number "3" on the reverse. All letters and numerals are appliquéd in navy on red tackle twill. The uniform number, year, set number, and size ("3-68-1-44") are chain-stitched in navy upon a grey strip tag in the collar. A "Wilson 44" tag is located on the left front tail. The left and right sleeves are adorned, respectively, with a "Cubs" patch and an Illinois "Sesquicentennial" patch. The jersey is original as issued, with no alterations, and as one would expect for a coach's jersey, displays very light wear. Joe Becker, a catcher, played two seasons with the Cleveland Indians (1936 and 1937) before enjoying a sixteen-year major league coaching career (1955 to 1970). 1968 Chicago Cubs road jerseys are scarce. This is only the second we have offered and we cannot recall having seen more than a few others at auction in the past twenty years. This is an exceptional example complete with both patches. Reserve $300. Estimate $500+.