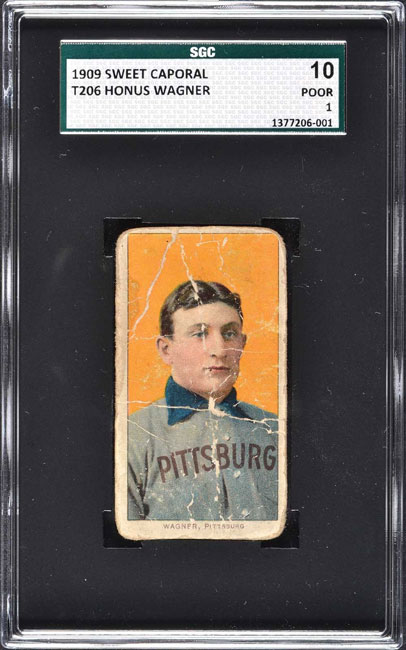 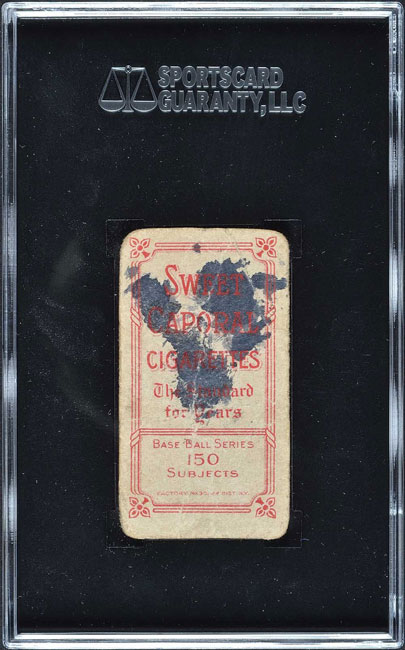 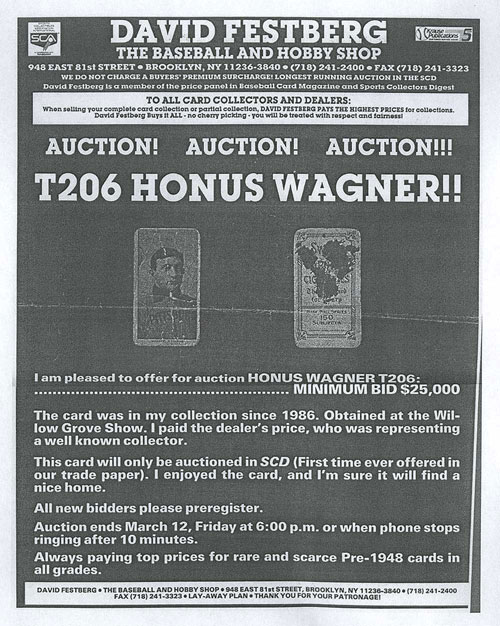 Every T206 Wagner naturally has a great story, sharing the Wagner legend that is now part of classic American folklore, and every Wagner also has an additional story relating to its provenance. Collectors have always been fascinated with all aspects of the history of Wagners: how they were discovered, where they have been purchased, when, for how much, where they have been, how they have happened to survive. This is a particularly fascinating card in that it has a long history of being one of the few Wagners that can be traced back in the hobby over thirty years, once the prize card of David Festberg, a very noted (and colorful!) collector and dealer from Brooklyn, New York, who was extremely active in the hobby for several decades beginning in the 1970s. Festberg was one of the very first dealers to regularly run auctions in Sports Collector's Digest, and in February 1993, he announced in a full-page advertisement his intention to offer up for auction his personal example of the legendary Wagner card. The card, according to Festberg's ad, was purchased at the Willow Grove, Pennsylvania, show in 1986 for full asking price from a dealer on the show floor who was representing a "well known collector." Festberg kept the card in his personal collection until making the decision to offer a T206 Honus Wagner for auction in the SCD. The minimum bid was $25,000, and while we don't know what the card ended up selling for, it is safe to assume that it was a relatively modest amount compared to the prices we associate with Wagner cards today. (As a point of reference, several other examples in similar, or even slightly better, condition sold at public auction for under $50,000 in the mid-1990s.) The "Festberg Wagner" did not reappear within the hobby for another fifteen years, at which time it was presented in a 2008 Heritage auction as one of the signature lots, realizing $227,500. Our consignor purchased the card privately a short time later and has kept it in his sole possession ever since.

Over the years, one market trend is clear: The T206 Wagner card, even in the lowest grades, has always continued to climb in value over time. In fact, it may be more accurate to say that lower-grade Wagners have appreciated at a faster rate than higher-grade examples. There has always been an extremely strong demand for low-grade Wagners. Most Wagners in existence are in low grade, so the demand for low-grade Wagners is due in part simply to the fact that there is little in the way of higher-grade choices to consider. According to the combined Population Reports of PSA and SGC, thirty-six of the fifty T206 Honus Wagners evaluted by those companies to date are graded GOOD or lower. (Fifty may even be a bit high as several examples have been crossed between the two companies over the years.) Of those thirty-six, twenty-four grade Authentic or POOR. It is also the case that collectors are willing to be very flexible on the condition of a Wagner. Of course, the better the condition, the more valuable a Wagner will be to collectors who can afford it. But more collectors can afford a low-grade Wagner than a high-grade Wagner. Because more people can afford a low-grade example, it's easier to sell, if the need arises. A low-grade Wagner, therefore, has much greater liquidity, which is a very desirable quality for any commodity or store of value. Low-grade Wagners have also become harder to find, with fewer coming to market in recent years as the collectors holding them appreciate their rarity and realize their incredible potential value.

The Card: This T206 Honus Wagner boasts bold colors, a flawlessly crisp portrait image, and perfect registration. Graded POOR 10 by SGC, the card naturally has various condition flaws, including rounded corners and creasing. The Sweet Caporal reverse is boldly printed, with dark ink splatters visible in the top half of the reverse. Given that most T206 Wagners are in low-grade, the overall appearance of the card is of the greatest significance and cannot be communicated by just a numerical grade. Every card is different. No one is ever going to confuse this card with the famous Gretzky-McNall Wagner, but in our opinion, this card presents with tremendous character and is overall very pleasing.

Valuing Wagners is very subjective. That's for the bidders to decide. History has shown that the T206 Wagner has always been a tremendous store of value, and has gradually climbed in price for decades, commanding ever-impressive sums in all grades. Whatever the auction result, it is a great privilege and honor for us to be chosen to present and document the history of this outstanding T206 Honus Wagner card. Reserve $50,000. Estimate (open).