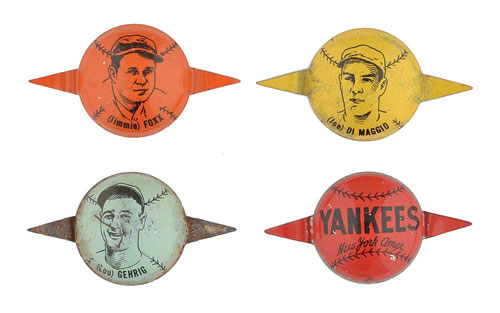 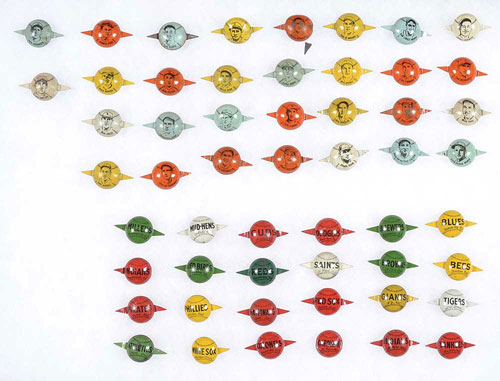 Presented is a tremendous complete master set of fifty-four different 1938 "Baseball Tabs," featuring a variety of players and teams on .75-inch diameter metal tabs. This master set is highlighted by nineteen Hall of Famers among the thirty player tabs, including Joe DiMaggio, Bob Feller, Jimmie Foxx, and Lou Gehrig. Also included is an uncataloged player tab of Zeke Bonura, the only example of this tab that we have ever seen. Similar to pins, these metal tabs feature an extension at the sides that is meant to be folded over a lapel or pocket edge so that the tab can be displayed on a jacket or shirt. The player tabs feature a black-and-white portrait of the player with his name printed underneath. The team tabs feature the name boldly printed in the center with the city and league printed underneath. Both types of tabs are designed with the seams of a baseball in the background, providing the appearance that the tab is a colorfully designed baseball. Overall condition of the tabs in this collection is spectacular Ex to Ex-Mt (which is particularly strong for this litho set), with just two examples missing one side tab and one example missing both side tabs. This is an incredibly rare complete master set of this issue, highlighted by an impressive selection of Hall of Famers and the inclusion of the uncataloged example of Zeke Bonura. Total: 54 tabs. Reserve $500. Estimate $1,000+.