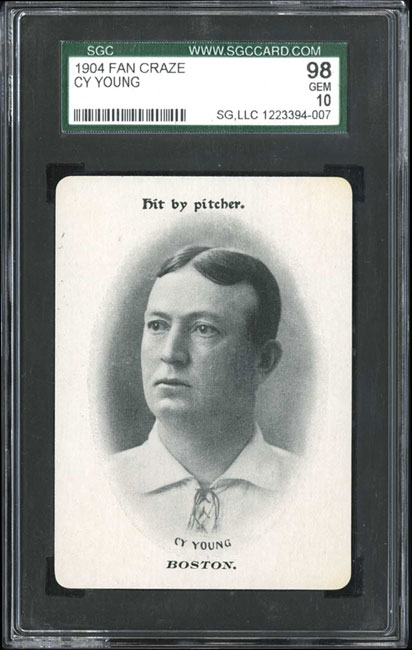 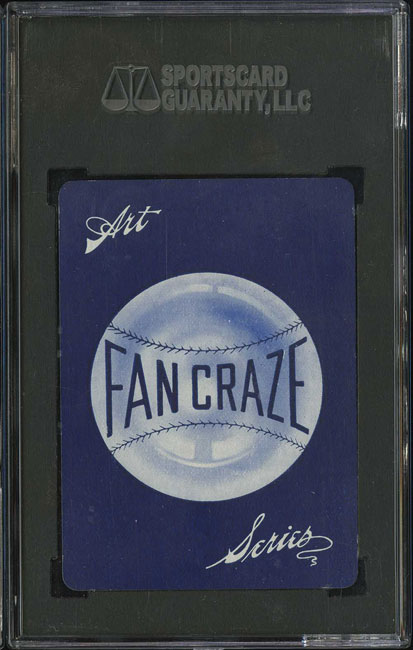 Graded GEM MINT 98 by SGC. This is the ONLY example graded at this level! Ultra high-grade example of Hall of Famer Cy Young from the 1906 Fan Craze playing-card set. Issued in 1906 by the Fan Craze Company of Cincinnati, these cards were designed as a deck of baseball-game playing cards and feature what many collectors consider the finest portrait poses of turn-of-the-century ballplayers ever produced on baseball cards. Young is one of thirteen Hall of Famers represented within the 54-card set. The Fan Craze set has a special significance to collectors, as it is one of the few sets issued in the earliest years of the twentieth century, and the set includes many players who appear in no other card sets. Because of its year of issue, it is also one of the few sets which include a blend of 1910-era stars along with players who made their mark in the nineteenth century. The offered example of Young is, as expected, flawless in every way. Crisp, clean image, no wear to the edges or corners, and perfectly clean blue reverse. It is an understatement for us to say that this is a very sharp-looking card. It has miraculously survived in essentially perfect condition for 110 years! A tremendous GEM MINT example of key Hall of Famer Cy Young from one of the most important issues of the era, and one of the most beautifully designed and classic of all Cy Young cards. Reserve $2,500. Estimate (open).