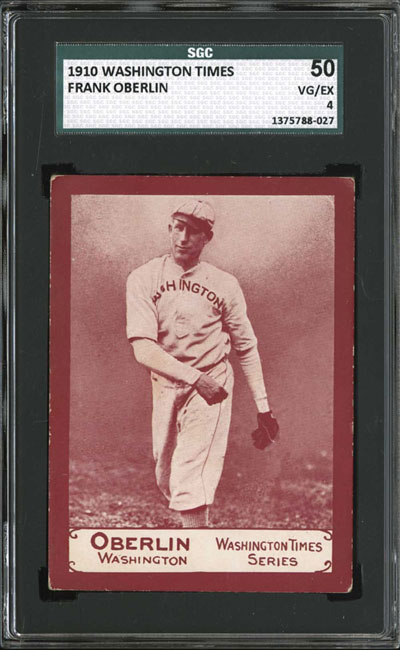 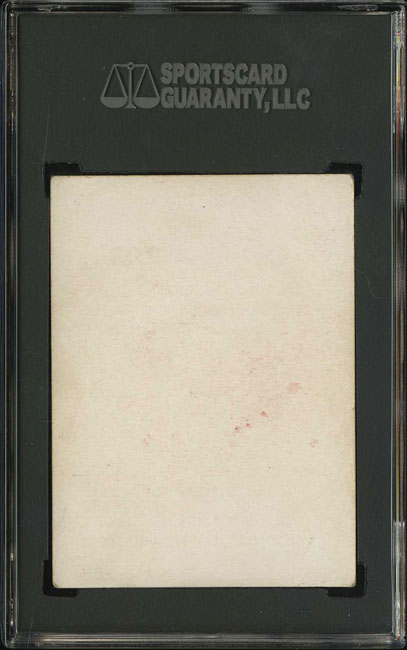 Graded VG/EX 50 by SGC (submitted by REA). Presented is a remarkably rare sample card of Frank Oberlin (Senators) from the Washington Times set. This is the only example of Oberlin known to exist! To date, many of the confirmed subjects are unique, with the exception of Clyde Milan and Gabby Street, each of which has two confirmed examples. (Our thanks to vintage-card collector and scholar Dan McKee for his assistance!) Issued by the Washington Times newspaper, this set features American League players on burgundy-colored cards measuring 2-9/16 x 3-9/16. The player's last name and team are printed underneath his image alongside "Washington Times Series." The backs are blank. While this card will be desirable to collectors regardless of its grade, the offered example has the added benefit of being in outstanding condition for this issue. Only twelve examples (of all subjects) have ever been graded by PSA and SGC combined, and none has ever graded higher than VG-EX (five VG-EX, two VG, and five GOOD)! It is bright and crisp, with perfect centering and even wear at the corners. The blank reverse is almost entirely clean, with a very faint wrinkle visible that does not break through to the front. This is a beautiful example of this extremely rare sample card, the first from this series that we have ever handled. A superb card that would be a notable highlight in even the most advanced type-card collection. From the Dan Gantt Collection. Reserve $1,000. Estimate (open).