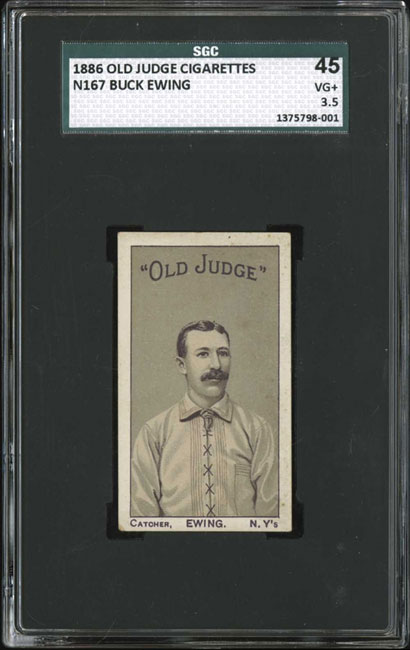 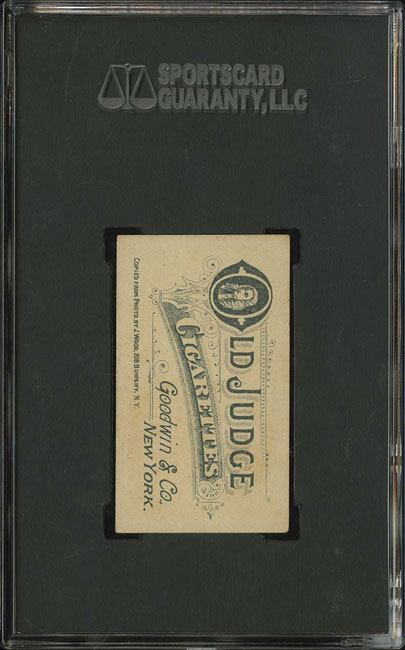 Graded VG+ 45 by SGC (submitted by REA). This is the only example graded at this level by SGC with none higher. Though it is the example given the highest grade by SGC, we should note that we grade this gem considerably higher, and as can be easily seen, it has a much stronger Excellent (or better!) appearance. This is an astounding high-grade example of one of nineteenth-century card collecting's most desirable rarities! As detailed in the May 2013 article on N167 Old Judges in Old Cardboard magazine by vintage-card scholar Jim Blumenthal, while this set has always been identified as being issued early in 1886, it is very possible (in fact, we think a virtual certainty) that the N167 set actually dates from 1885. Few nineteenth-century cards compare in rarity or significance to N167 Old Judges. These cards represent the very first series of baseball cards ever issued by Old Judge and feature photogravure portraits based on photographs by Joseph Wood. In addition to their very distinctive look, they are also the only Old Judge series to feature advertising on the reverse. The thin stock on which N167s are printed makes them especially susceptible to tears and other damage. This is a stunning example of Hall of Famer Buck Ewing from one of the rarest and most important of all nineteenth-century issues. Crisp and clean, with an overall strong Excellent appearance, the card is centered very slightly to the bottom with four strong corners showing light wear (a tiny corner crease in the lower left is responsible for the modest grade). The reverse is entirely clean with a boldly printed advertisement. To date, only fifty-one examples from the series have ever been graded by PSA or SGC, including seven Ewing examples, and we believe this number may actually be slightly inflated due to cards being crossed over from one company to another. Whatever the true number, N167s are rare! REA has previously offered two other Ewing cards: an SGC GOOD 30 example appeared as Lot #26 in our 2009 auction, realizing $26,438, and a PSA VG-EX 4 example appeared as Lot #84 in our 2005 auction, realizing $43,500. It is a privilege for us to offer even a "common" player from the N167 Old Judge set, let alone a key Hall of Famer. This is an extraordinary Hall of Famer example of one of the most highly prized of all nineteenth-century baseball-card rarities that would be a significant addition to even the most advanced world-class collection. From the Dan Gantt Collection. Reserve $10,000. Estimate $20,000++.