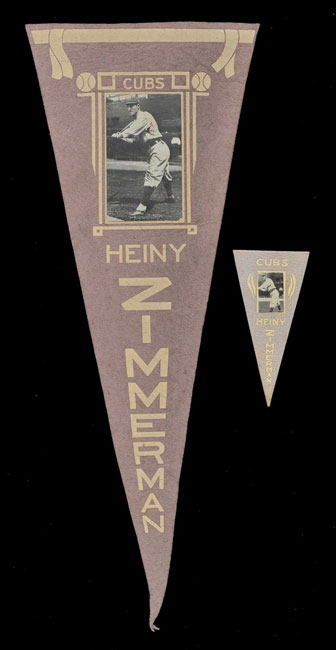 The 1916 BF2 Ferguson Bakery pennants are one of the most unusual, interesting, and displayable issues of the era. These pennants (each 5.5 inches tall) were issued as premiums with Ferguson Bakery products and are designed with a photograph of a given star affixed to a felt pennant with the player's name and team identified below. Far less well known are a related series of gigantic BF2 pennants, which are designed exactly in the same manner as the small BF2s, but are an incredible twenty-three inches in height! These large pennants were available as special premiums, with one pennant available in exchange for fifty coupons from five-cent loaves of bread. These are extremely rare. Only eight different players have ever been checklisted to date. Presented is a very rarely offered gigantic BF2 display pennant featuring Heinie (spelled Heiny on the pennant) Zimmerman of the Chicago Cubs. This exceptional pennant is also previously uncataloged and is an exciting new addition to the checklist! The large pennant is accompanied by a small BF2 of Zimmerman, which is perfect for comparison of scale and for display. The large pennant presents as Excellent, with very slight crazing visible to the applied lettering and a few small creases to the photo. The small pennant is Near Mint. We have seen only five or six examples of the large pennants during the past forty years. This is an incredible opportunity to acquire a matched pair of pennants, including the exceedingly rare (in the case of Zimmerman, possibly even one-of-a-kind, as it has been uncataloged until now) BF2 large variety. Total: 2 pennants. From the Dan Gantt Collection. Reserve $300. Estimate $500/$1,000++.