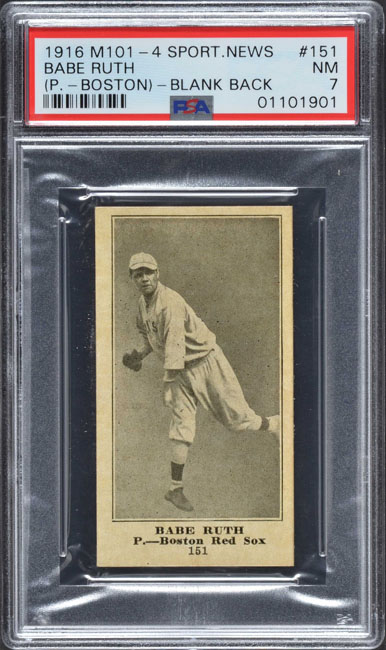 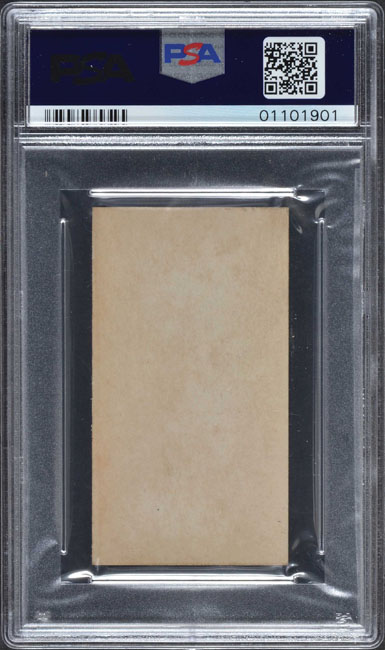 Graded NM 7 by PSA. Presented is an extraordinary high-grade example of one of card collecting's greatest icons: Babe Ruth's rookie card. Universally recognized as one of the most famous and highly prized of all baseball-card rarities, it would be hard for a piece of cardboard to better symbolize the history and the essence of American sport more than this Sporting News rookie card of Babe Ruth. The significance of Ruth's rookie card transcends the world of card collecting. Every scholarly list of vintage-card collecting's most important treasures includes Ruth's first Major League card. (Note: The 1914 Baltimore News card of Ruth featuring him as a minor leaguer, of course, predates both the M101-4/5 issues.) This is among the finest Babe Ruth rookie cards we have ever offered! This is a world-class solid Near Mint example, with only the slightest hint of wear to the very tips of the corners visible under high-powered magnification. If this card were in a NM-MT 8 holder, we wouldn't bat an eye. It looks like a NM-MT 8! The front surface is perfectly crisp, clean, and free of defects. The image of Ruth is dark and sharp. This is also an extraordinary example in that the photo does not have any horizontal print lines that are often found on this card. The card is very well centered, just a touch to the right, and perfectly centered top to bottom. The blank reverse is clean with just a hint of faint age toning. This is one of only two examples of the M101-4 Babe Ruth with a blank reverse ever graded at this level by PSA, with none graded higher. The rookie card of Babe Ruth is without question one of the most important cards in all of card collecting. This is a simply phenomenal example in all respects of one of the most famous, significant, and highly prized of all baseball cards. Reserve $100,000. Estimate (open).