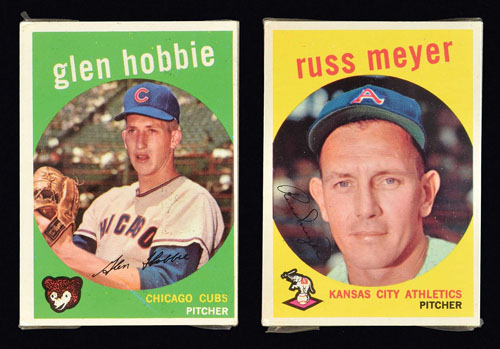 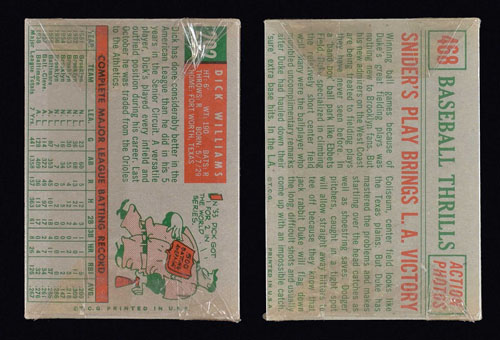 Pair of original unopened twelve-card cello packs from the 1959 Topps baseball set. The first pack is from the fourth series and features #334 Glen Hobbie (centered to the right) on front and #292 Dick Williams (HOF) on the reverse. Also featured in this series are Hall of Famers Banks, Kaline, Anderson RC, Aparicio, Roberts, and Ashburn. The second pack is from the sixth series and features #482 Russ Meyer on the front and #468 Snider's Play Brings L.A. Victory on the back. Also featured in this series are Hall of Famers Clemente, Mathews, Doby and Schoendienst, as well as the entire Baseball Thrills subset, which includes cards of Mantle, Musial, Mays, and Aaron among others. While it is impossible to provide guarantees with reference to grading of unopened material, there is, of course, the very real possibility that within this pack are Mint examples of these cards or others. Both packs are clean and very tightly sealed, with small tears at the left-side corners on both packs. Steve Hart of the Baseball Card Exchange (the leading authority on unopened material) has personally reviewed these packs and assured us they are 100% guaranteed unopened. A worthy addition to any unopened pack collection or companion to any complete 1959 Topps set. Total: 2 packs representing 24 cards. Reserve $300. Estimate (open).