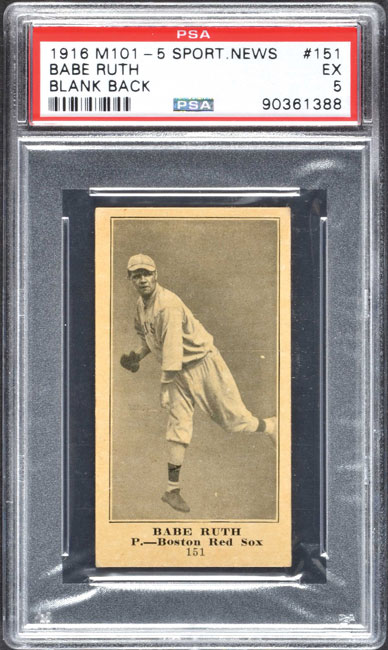 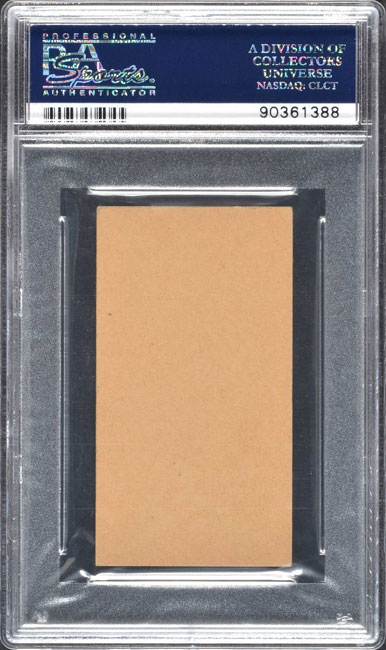 Graded EX 5 by PSA. Presented is a magnificent example of Babe Ruth's rookie card, universally regarded as one of card collecting's most recognizable and highly prized baseball-card rarities. It would be hard for a piece of cardboard to better symbolize the history, the essence of American sport, than this Sporting News rookie card of Babe Ruth. Ruth had pitched in only four games with Boston in 1915 but fortunately impressed the card manufacturer enough to warrant inclusion in this major issue. Its significance transcends the world of card collecting. Every scholarly list of vintage-card collecting's most important treasures includes Ruth's first Major League card. (Note: The 1914 Baltimore News card of Ruth featuring him as a minor leaguer, of course, predates both the M101-4/5 issues.) The rookie card of Babe Ruth is without question one of the most significant cards in all of card collecting. This is a solid Excellent example, with only the slightest hint of wear to the strong, square corners (primarily upper right), a single barely visible natural print line at his waist that is typical of this card (but is extremely light, far less prominent than usually seen on this card), and two tiny white print dots, which are related to the manufacturing process. The magnificent centering on this example is also of special note. It is beautifully centered, far better than usually seen on this card, with a crisp, flawless image of a slender Ruth in his pitching follow-through. Both the front and blank back are bright, crisp, and clean. This is an extremely attractive example in all respects of one of the most famous, significant, and highly prized of all baseball cards. It would be a worthy addition to even the most advanced Babe Ruth or Hall of Fame collection! Reserve $100,000. Estimate (open).