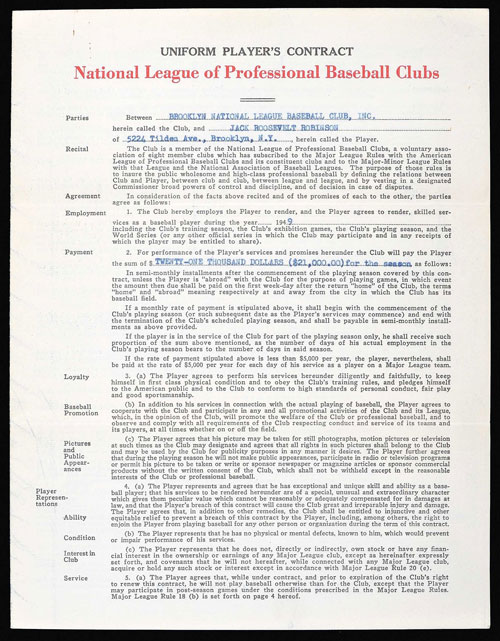 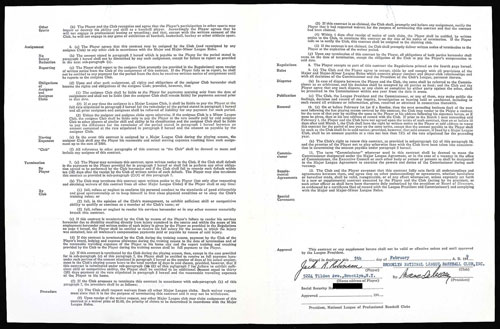 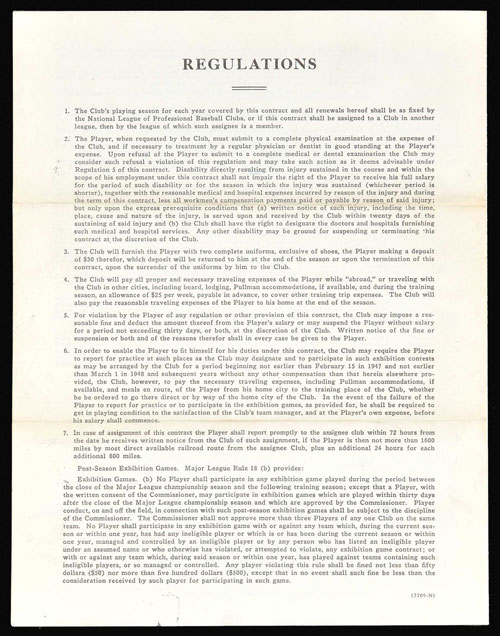 Exceedingly rare Jackie Robinson Brooklyn Dodgers contract dating from Robinson's 1949 MVP season. This is, to the best of our knowledge, one of only three Jackie Robinson professional baseball contracts in private hands. The other two, Robinson's 1946 Montreal Royals contract and his 1947 Brooklyn Dodgers contract, are owned by Collectors CafÃ© in New York City, which, according to published reports in 2016, were available for purchase by any collector willing to pay the $36 million asking price. While the historical significance of those other two contracts cannot be overstated, their availability seems to be limited to an extremely small number of wealthy individuals or organizations, leaving the offered Robinson contract as the only realistic alternative for collectors. This particular contract originates directly from Rachel Robinson, Jackie's widow, and was initially sold at auction in 2000 along with a large number of other Jackie Robinson items consigned directly by Rachel Robinson. At the time of the sale, the auction house stated that this was the ONLY Jackie Robinson signed Brooklyn Dodgers contract in the family's possession, although the family did acknowledge it possessed two unsigned contracts from different years. While we have no way to corroborate that statement, the fact that we have never seen or heard of another Jackie Robinson Brooklyn Dodgers contract other than this one and his 1947 contract, leads us to believe that it is true. Since only three contracts were normally signed by a player (one for the player, one for the team, and one for the League), and the Robinson family admittedly retained only one, it seems unlikely that any new examples will turn up. (Robinson played with the the Dodgers for only ten seasons, so the supply was limited to begin with.) Our consignor was the purchaser of this contract at auction in 2001, and it has remained in his possession since that time. Other than Robinson's 1947 Dodgers contract, we cannot imagine a more significant example than that dating from 1949, which was his finest season in the majors. The four-page fold-over contract, dated February 5, 1949, between Jackie Robinson and the Brooklyn National League Baseball Club, Inc., is signed in black fountain pen by both "Jack R. Robinson" (grading "10") and "Branch Rickey" ("10"), general manager of the club. The one-year agreement calls for Robinson to receive a salary of $21,000 for the 1949 season, an amount that represents an increase of $7,000 over his previous year's salary. While we do not have accurate records for all the Dodgers player salaries in 1949, Robinson's salary appears to be among the highest on the team, as Pee Wee Reese was paid $17,000 the year before. By season's end, Robinson's salary would be seen by all, including the penurious Rickey, as a bargain. Robinson finally "emerged" in 1949 as he led the league in both batting average (.342) and stolen bases (37). He also hit 16 home runs, scored 122 runs, and totaled 124 RBI. His batting average, along with his number of stolen bases, runs, and RBI, all represented career-high marks as well. Robinson's performance not only led the Dodgers to the National League Championship, but earned Robinson his one and only MVP Award at season's end. Robinson continued his torrid pace over the next five seasons, registering batting averages of .328, .338, .308, .329, and .311, respectively, during that span. He finished his career in 1956 with a lifetime average of .311. The contract (8.5 x 11 inches) displays two horizontal folds and a light paperclip impression along the top border. In Excellent to Mint condition overall. Full LOA from Steve Grad and Brian Sobrero/Beckett Authentication. Auction LOA from James Spence/JSA. Opening Bid $10,000. Estimate $30,000+.