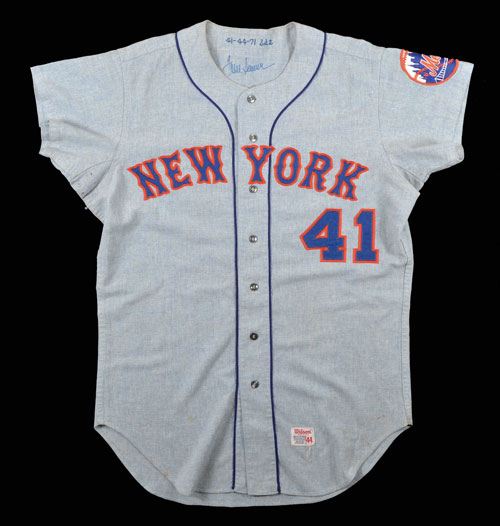 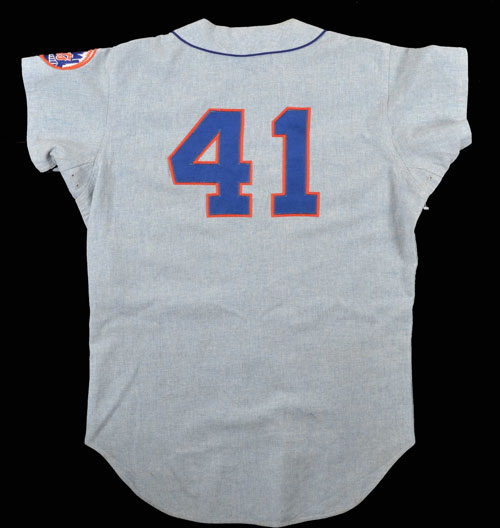 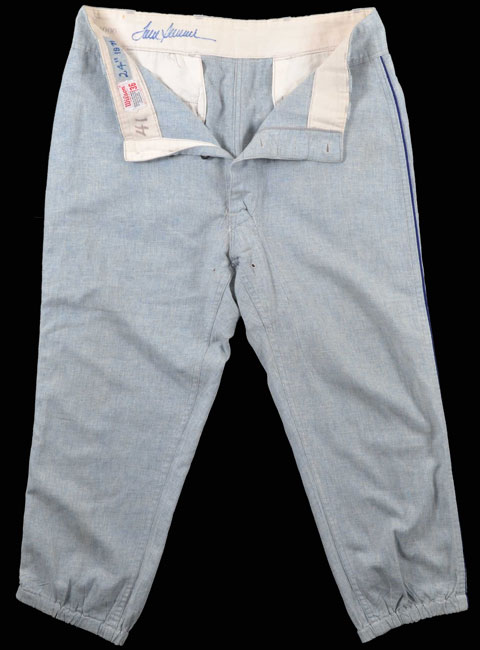 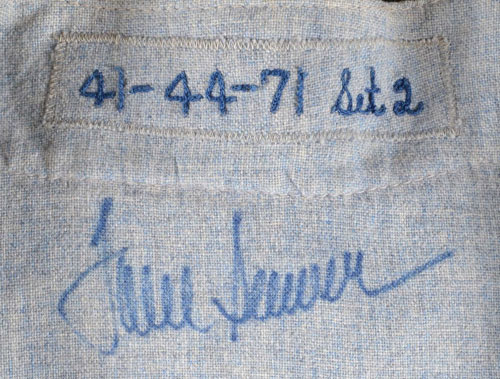 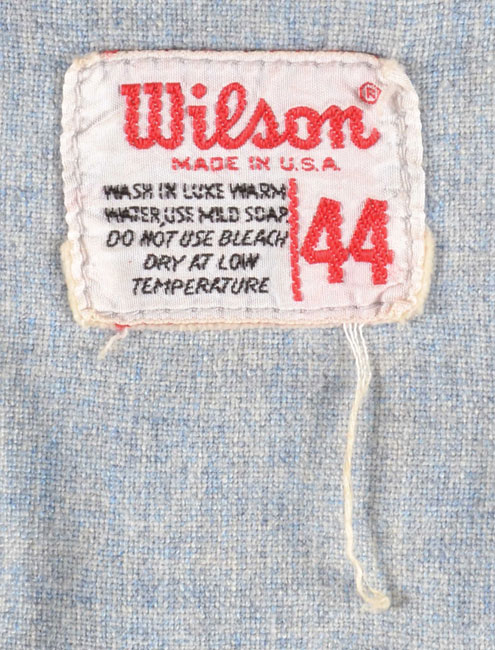 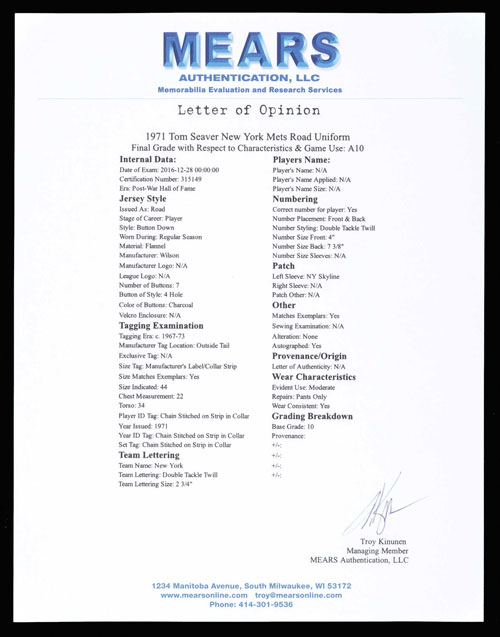 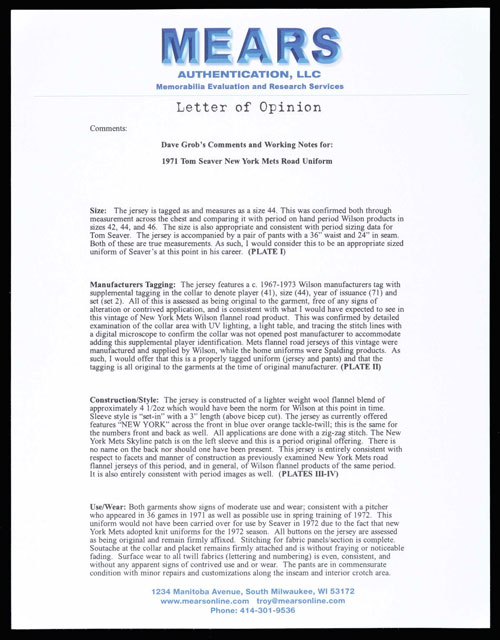 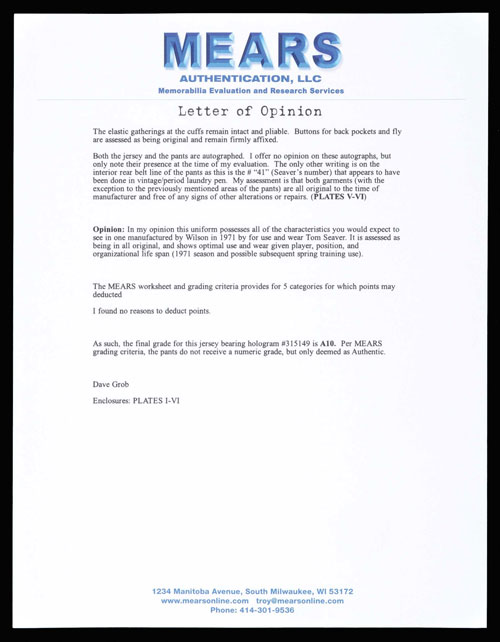 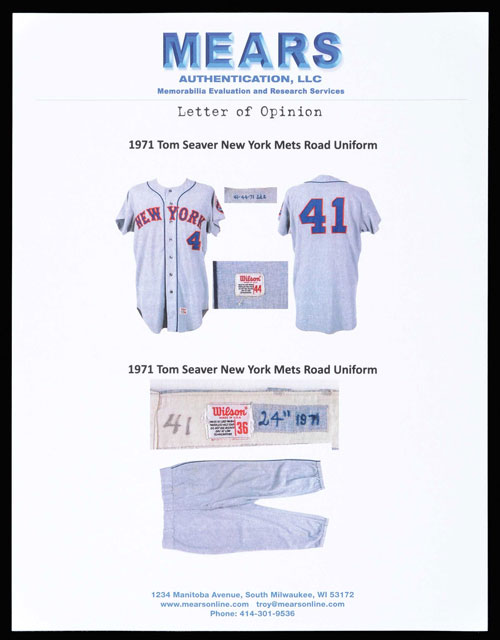 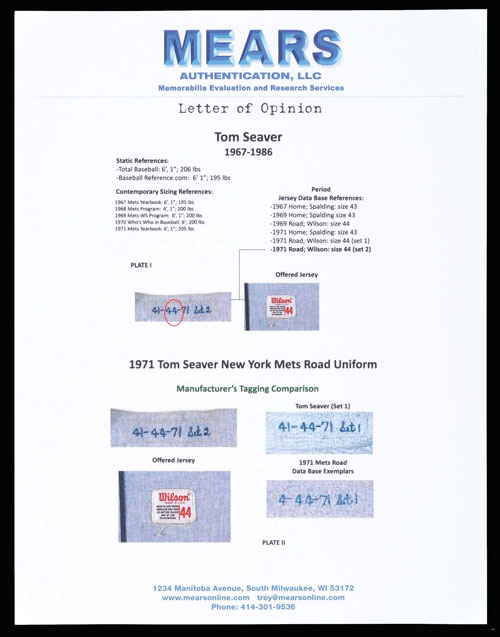 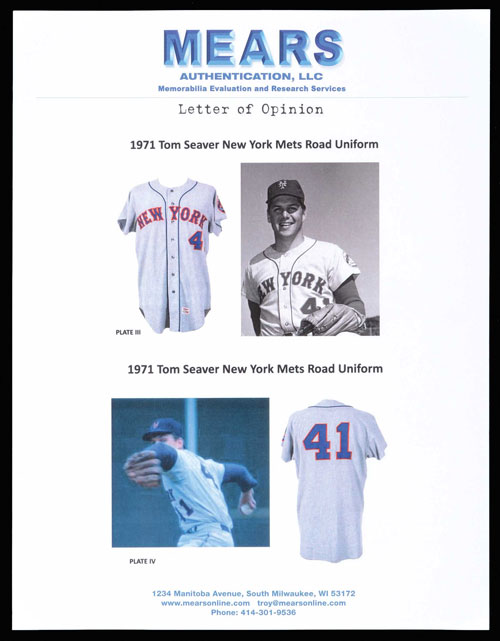 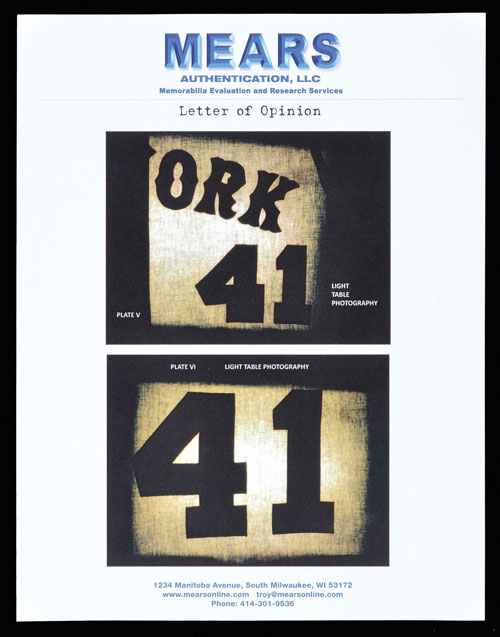 1971 New York Mets road flannel uniform (jersey and pants) worn by Hall of Fame pitcher Tom Seaver during one of the finest overall seasons of his career. Graded A10 by MEARS. This is one of just four Tom Seaver New York Mets uniforms we can recall having seen at auction in the past twenty years, not to mention the earliest (we have seen a 1971 home uniform as well). It is also one of a very small number of Seaver flannels known in the hobby. (Seaver flannels are rare because he joined the Mets in 1967, but the club switched to knit uniforms just five years later, in 1972.) The gray flannel jersey is lettered "New York" across the front and features the number "41" on both the left breast and reverse. All letters and numerals are appliquÃ©d in blue on orange tackle twill. The uniform number, size, year, and set number ("41-44-71-Set 2") are chain-stitched in blue upon a gray strip tag in the collar. A "Wilson 40" label is located on the left front tail. A New York Mets team patch adorns the left sleeve. Seaver has signed the jersey in blue Sharpie (grading "8") in the collar. The matching gray flannel pants feature blue piping down the side of each leg. Located in the waistband are a "Wilson 36" label and a gray strip tag bearing the inseam length and year ("24" 1971") rendered in blue chain-stitch. Seaver's uniform number ("41") is written in the waistband in black laundry marker, directly to the left of the manufacturer's label. An additional black stamping in the waistband reads "A4000/DW)." Seaver has signed the pants in blue Sharpie ("8/9") in the center of the waistband. The pants display minor customizations and repairs along the inseam and interior crotch area; otherwise both the jersey and pants are original as issued with no alterations. Both garments display moderate wear, which is consistent with having been worn by a pitcher who appeared in just thirty-six games. "Tom Terrific" compiled a record of 20-10 in 1971, with his league-leading marks in strikeouts (289) and ERA (1.76) representing career highs as well. Incredibly (by today's standards at least), Seaver also registered a career-high 21 complete games with four shutouts. Those achievements resulted in his finishing second in the CY Young balloting and ninth in the MVP balloting at season's end. Seaver is one of the greatest pitchers of the modern era and one of only twenty-four pitchers to record over 300 wins. He retired in 1986 with 311 wins (18th all-time), 3,640 strikeouts (6th all-time), and a 2.86 ERA. He was elected to the Hall of Fame in 1992, his first year of eligibility. This is one of the finest Tom Seaver New York Mets uniforms in the hobby and one that would be a highlight of any advanced New York Mets, Tom Seaver, or Hall of Fame jersey collection. Jersey graded A10 by MEARS (base grade of 10, with no deductions; MEARS does not grade pants, but they have been certified as "Authentic"). LOA from MEARS. Auction LOA from James Spence/JSA. Pre certified by Steve Grad and Brian Sobrero/Beckett Authentication. Opening Bid $5,000. Estimate $20,000+.