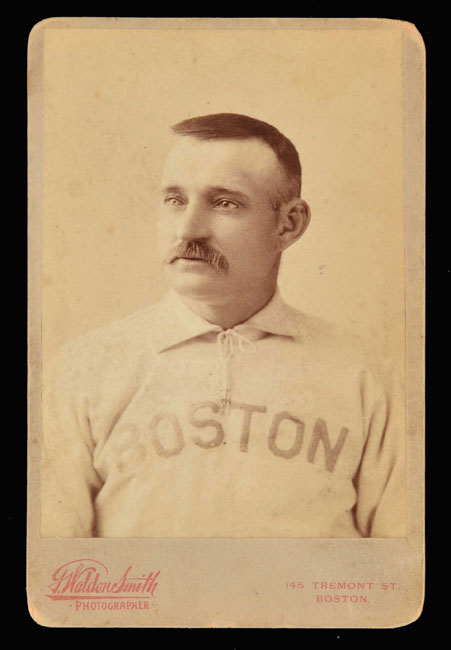 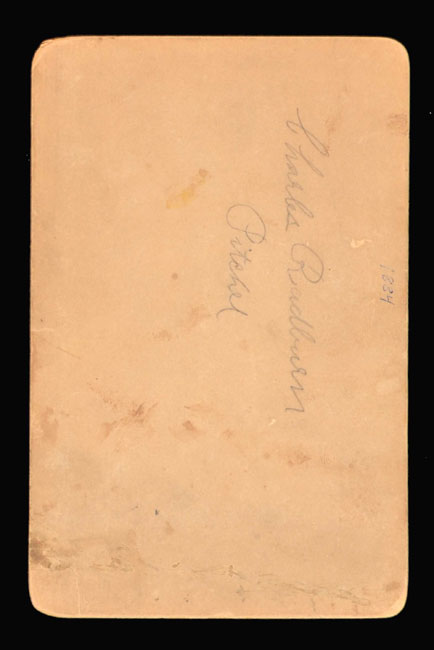 Professional studio cabinet capturing Hall of Fame pitcher Charles "Old Hoss" Radbourn as a member of the Boston Nationals, circa 1887. Produced by photographer Waldon Smith of Boston, Massachusetts, as noted along the base of the mount. Waldon Smith was one of the most prominent of all Boston-area photographers specializing in baseball subjects during the 1880s and early 1890s. Radbourn, who was described by one reporter at the time as erratic, capricious, and ill-tempered, may not have been the most amiable player, but he was certainly one of the greatest pitchers of his era. "Old Hoss" was a workhorse on the mound and in 1884, while pitching for Providence, set a Major League record with fifty-nine wins. Although he was often plagued by arm problems later in his career he still managed to win 309 games in just eleven seasons. Radbourn played with Boston from 1886 to 1889, before jumping to the Players League in 1890. He ended his career in 1891 with Cincinnati. After his retirement, he lost an eye in a hunting accident, and thereafter became somewhat of a recluse. He passed away in 1897 at the age of forty-three. He was elected to the Hall of Fame in 1939. The photo, which offers outstanding clarity and contrast, pictures Radbourn in one of his best known images, displays a few tiny areas of light pinpoint spotting and is otherwise in Excellent condition. The mount (4.25 x 6.5 inches) exhibits moderate corner wear to the naturally rounded corners and a few period notations (identifying Radbourn) on the reverse. An outstanding gem featuring this legendary Hall of Famer. Reserve $5,000. Estimate $10,000+.