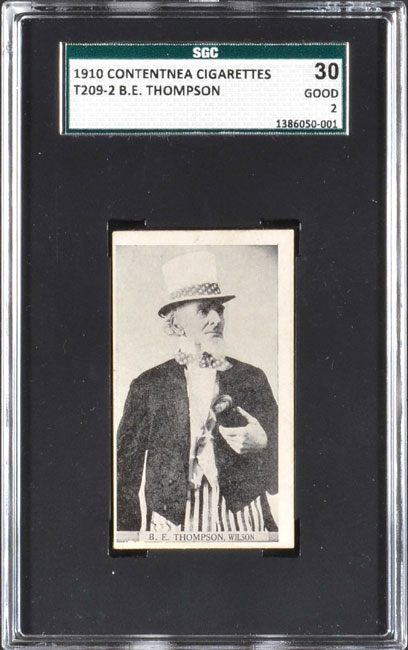 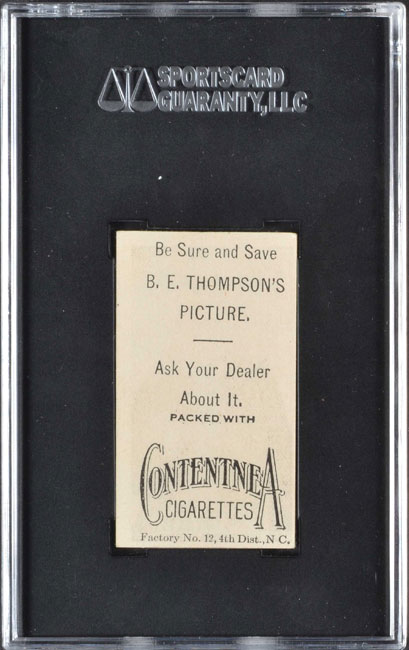 Graded GOOD 30 by SGC. Exceptional example of one of the most fascinating and unusual cards in all prewar card collecting: the 1910 T209 Contentnea Cigarettes "Photo Series" card featuring B. E. Thompson. This card has long intrigued collectors and even casual observers as it is unlike any other baseball card ever produced, featuring Thompson, a non-player, dressed as Uncle Sam. Printed on the reverse of each Thompson card is text which reads “Be Sure and Save B. E. Thompson’s Picture. Ask Your Dealer About It.” The text implies that Thompson's card should be of special importance to collectors who discover it inside a pack of Contentnea Cigarettes, but the exact reason as to why was not clear until recent years. An article in Old Cardboard (issue #28) by collectors Michael Peich and Tim Newcomb, both true card scholars and avid researchers of this set and others, establishes that Thompson's card was used in conjunction with a redemption offer by Erwin-Nadal. The premium for which his card was to be exchanged for was a souvenir album. Rarely offered, the card is crisp and clean, with a flawless image, four strong corners, and centered to the far left. The reverse is clean and boldly printed. There is minor surface paper loss along the bottom border, which is responsible for the card receiving such a modest grade. The T209 "Photo Series" set is composed of 224 different players from the Virginia League, Carolina Association, and Eastern League. T209 Contentnea "Photo Series" is one of the rarest and (in large part because of its rarity) most overlooked of all tobacco-card issues. This is a superb example of the most desirable card from the series, in far better condition than normally encountered, and one that would be an exceptional addition to any T209 set or type-card collection. Reserve $500. Estimate $1,000++.