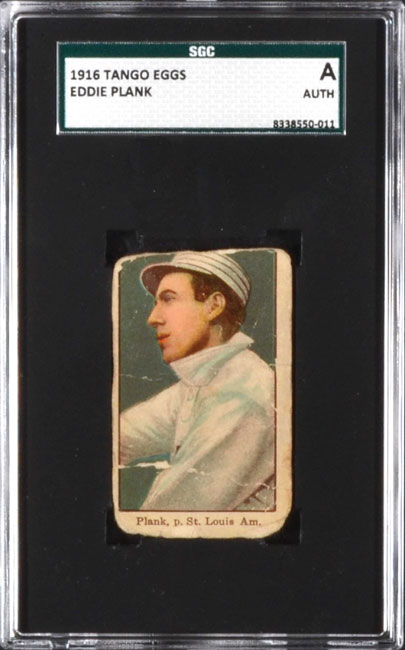 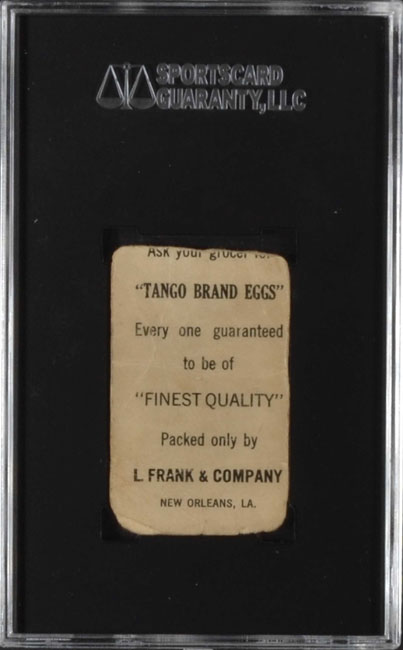 Presented is the ONLY known example of Hall of Famer Eddie Plank from the 1916 Tango Brand Eggs series! To the best of our knowledge, this is the only Tango Eggs card of Eddie Plank known to exist. This card was once part of a small original-owner collection of 1910 to 1920-era cards that REA had the privilege of offering in our spring 2012 auction. This card was offered separately from the collection as lot 1626 in REA’s May 2012 auction, selling for $2,962.50 at that time, and has been consigned to this auction directly by the original purchaser. When this small collection was delivered, the owners were very amused that this card was so interesting to us. It is, after all, admittedly in extremely low grade. It's really only about 90% of a card. But there, mixed in with a small group of low-grade T206s was a newly discovered Tango Eggs card. We were somewhat stunned. It was an even greater thrill to find it in an original family collection! This was previously a completely unknown card in the Tango Brand Eggs set! At the time, Plank was not listed as being in the set by either the Standard Catalog, Old Cardboard, or VCP. Prior to this discovery, we never even heard anyone mention Plank in the Tango Eggs set. The discovery of this card strongly suggested that the set originally included more cards than what was currently known (even if no examples have survived). Perhaps there were really forty-eight cards in the Tango Eggs set, exactly as there are in the E106 American Caramel set? We will probably never know, but it is a reasonable theory. Tango Brand Eggs cards are very similar in design to the 1915 E106 American Caramel set, but with different captions that do not reference Federal League teams since they were issued in 1916. The fronts have a glossy coating similar to E106 and T214 Kotton Tobacco cards. The backs feature advertising for L. Frank & Company's Tango Brand Eggs. Also, interesting for future reference is the fact that the cards in that small collection, including the Tango Eggs Eddie Plank card, were (according to the family) definitely collected in New Jersey. The legendary Tango Eggs Find was from the New Orleans area. Perhaps the cards were printed in New Orleans, were distributed everywhere but in very small numbers, and the legendary Tango Eggs Find represented a quantity of cards that survived in high grade precisely because they were never distributed? Once again, we will probably never know for sure, but as is always the case with Tango Eggs, there are always more questions than answers. The mystique of the Tango Eggs set continues! This is a fascinating card. It is very likely unique. Despite its extremely modest condition, (What can we say? It's a little rough!), it is the ONLY known example of Hall of Famer Eddie Plank from the 1916 Tango Brand Eggs set, one of prewar card collecting's most legendary sets. Encapsulated Authentic by SGC.
Reserve $1,000. Estimate (open).