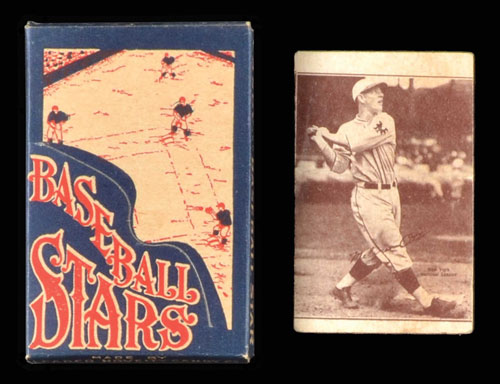 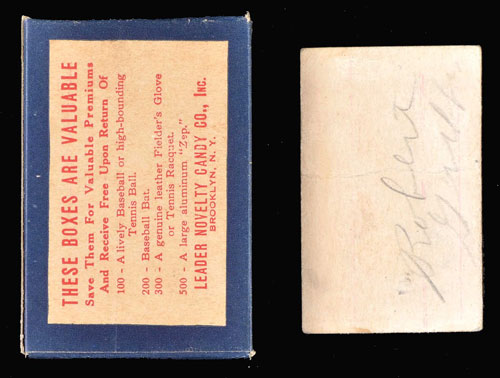 Very attractive example of New York Giants Hall of Famer Mel Ott from the extremely scarce 1929 Leader Novelty Candy Co. issue, plus an extremely rare original box. Believed to be an insert in boxes of Leader Novelty Candy, these small cards, which measure approximately 1-3/4 x 2-5/8 inches, share images with the R316 Kashin Publications set. Ott is depicted in a sepia-toned swing-through batting pose on the offered card, which has a crisp image, even wear on the corners, a heavy horizontal crease across the center and a second one in the upper right, and pencil writing on the blank reverse. Technically in Fair condition, but with much better appeal. The original box has a Near Mint appearance. The set is so rare that while only thirty-three different subjects have been verified to date, it is possible that the entire set may include as many as 101 subjects if the entire R316 checklist can also be found on Leader Novelty cards. This is a tremendous pair of extremely rare items from this obscure 1920s issue, offering a superb opportunity to acquire both a Hall of Fame sample card, and an original box that illustrates exactly how these classic cards were offered at candy stores in 1929. Total: 2 items (card and box). Reserve $200. Estimate (open).