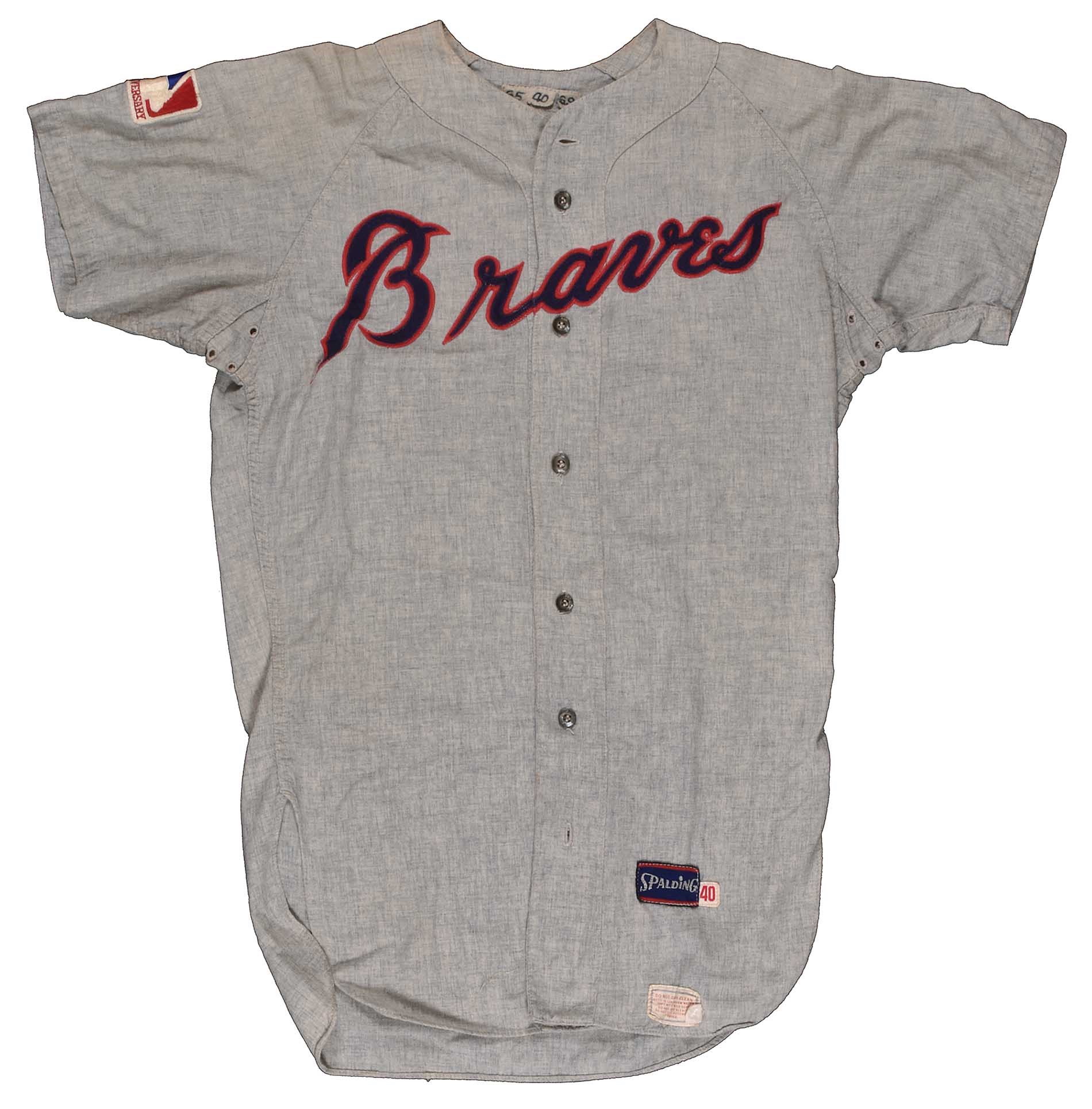 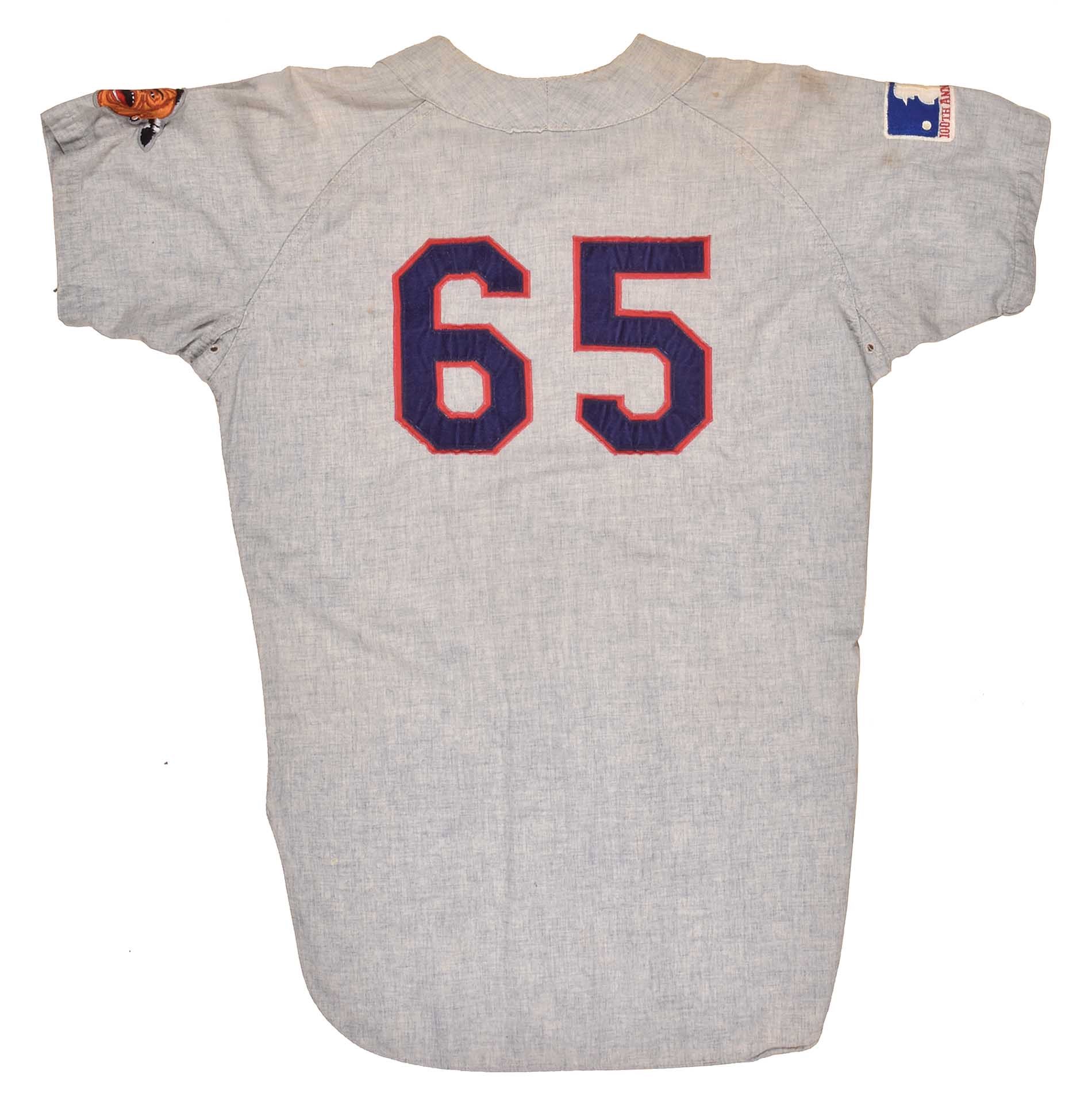 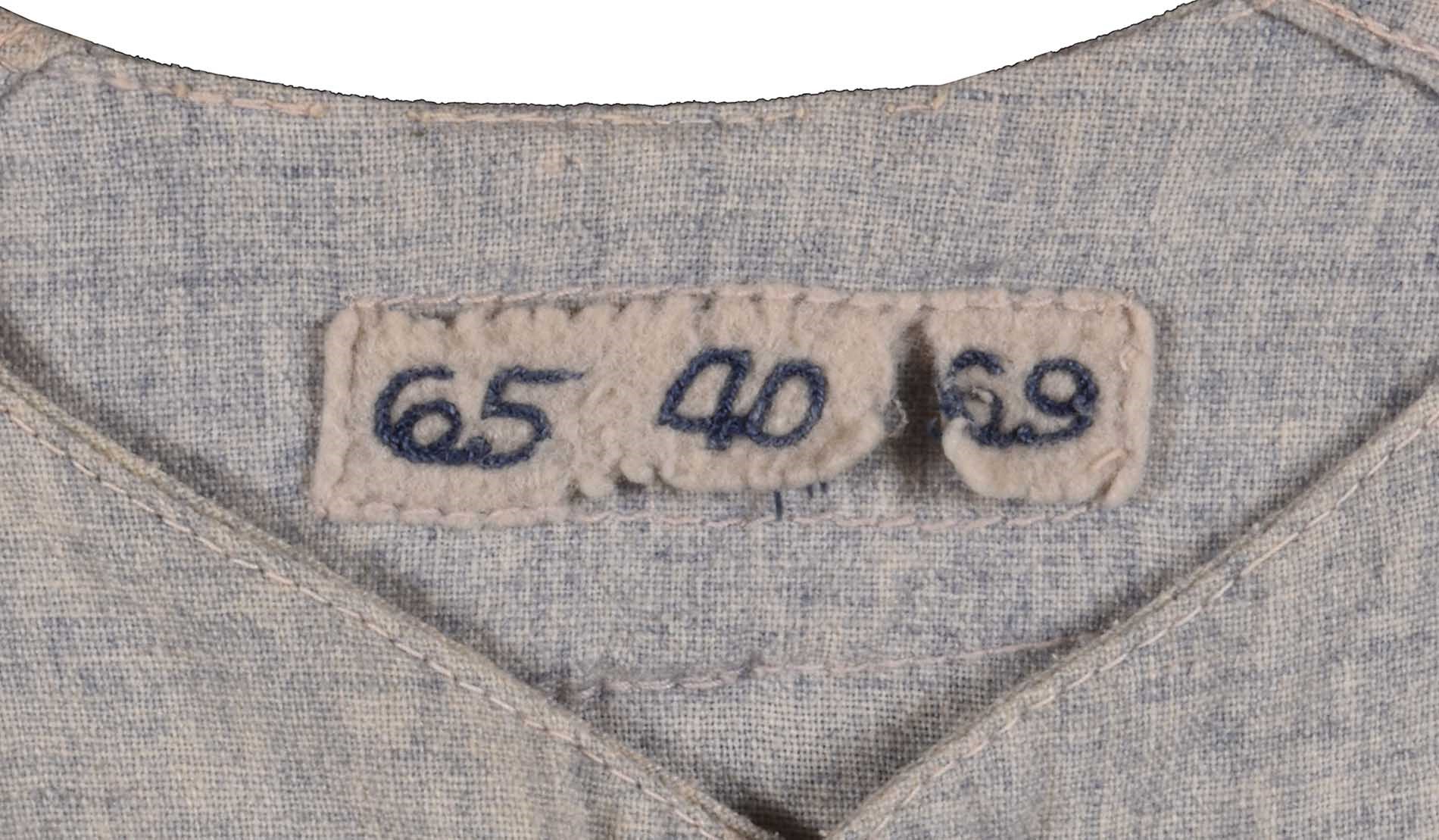 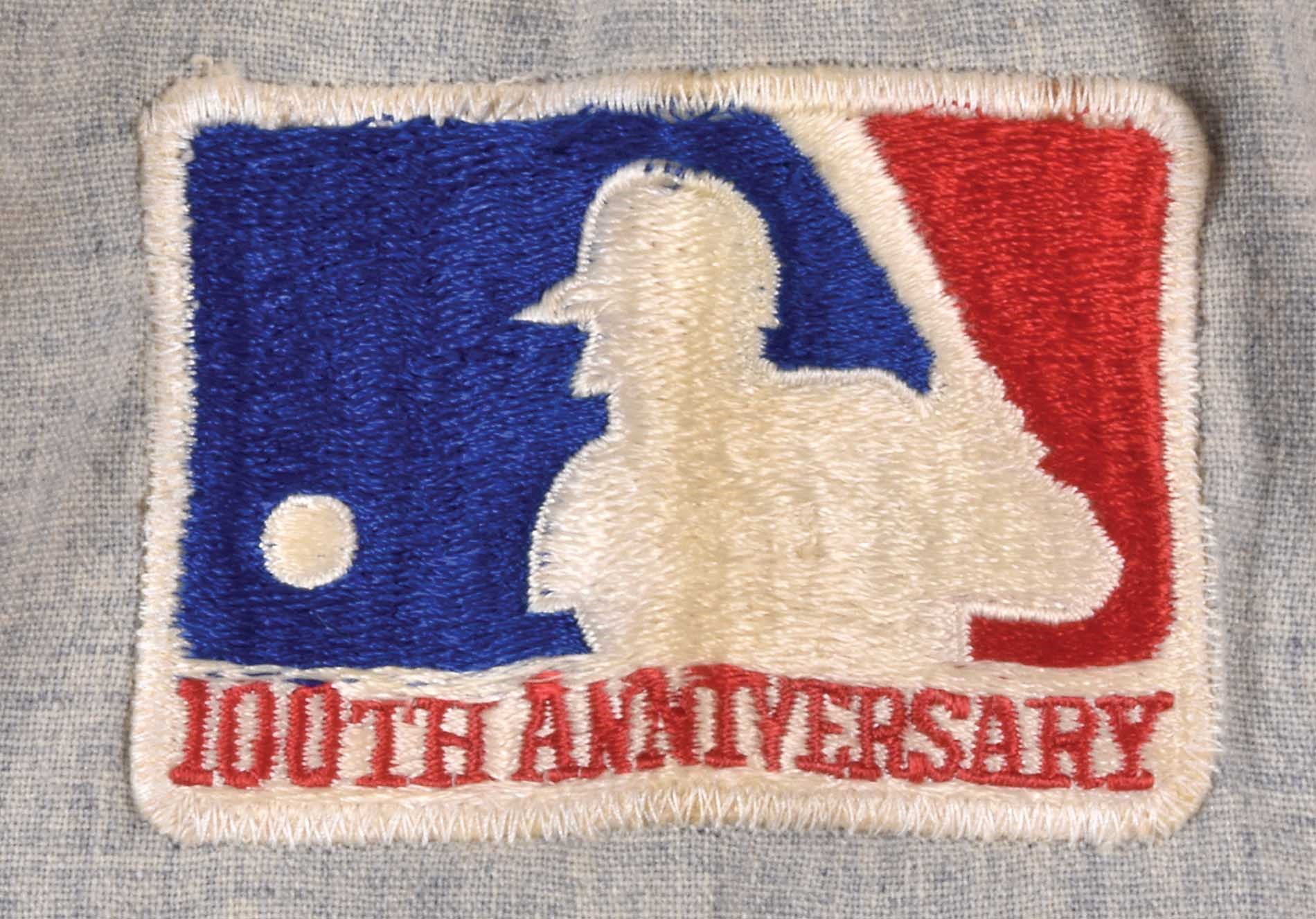 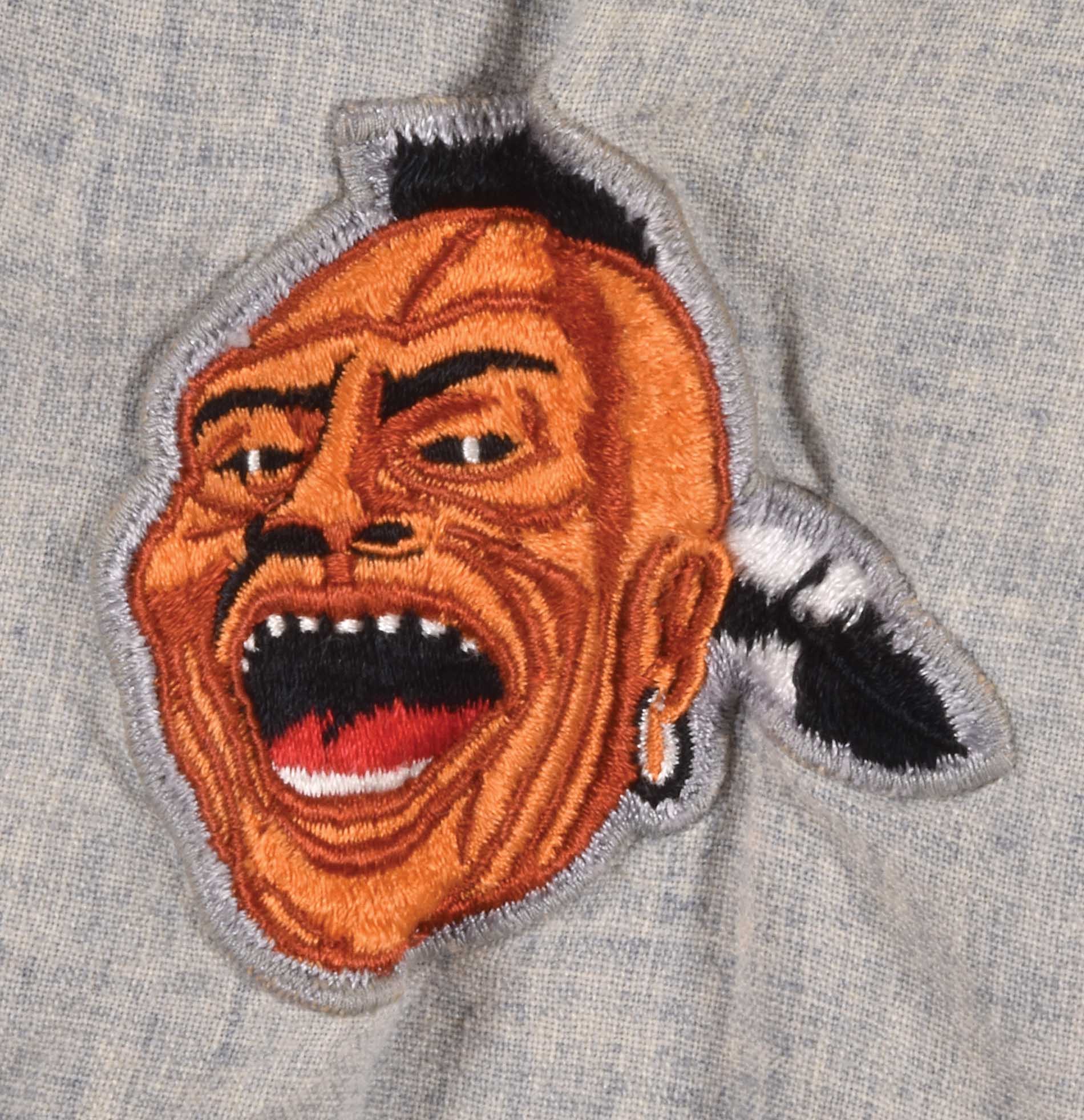 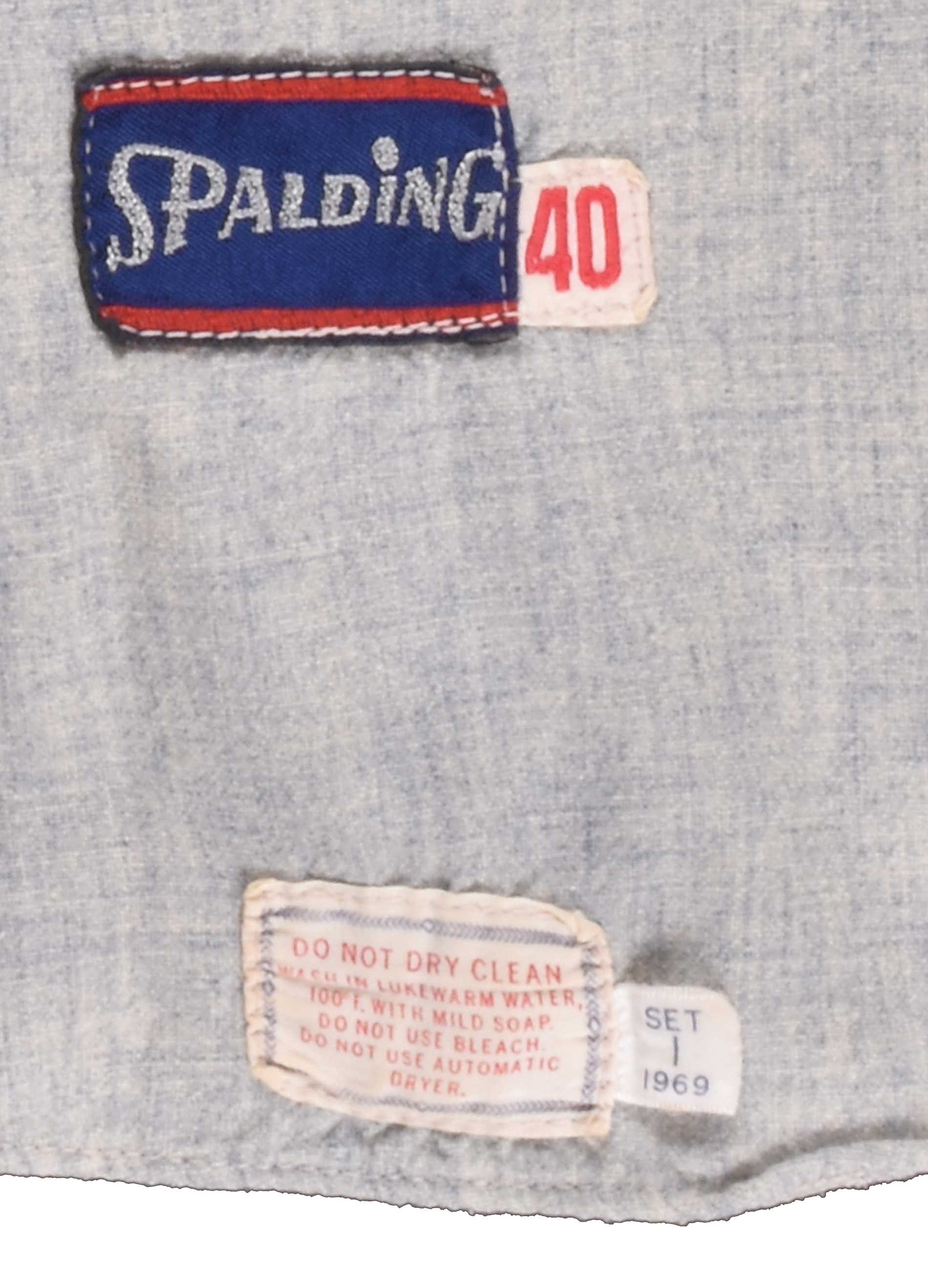 Atlanta Braves road jersey worn in 1969 by Hall of Fame pitcher Satchel Paige while serving as a coach. Accompanied by an LOA from Dave Grob of SGC, who has assessed the jersey as being "VERY GOOD/EXCELLENT." The grey flannel jersey is lettered "Braves" on the front and features the number "65" on the reverse. All letters and numerals are appliquéd in blue on red tackle twill. An Atlanta Braves team patch appears on the left sleeve, while a Major League Baseball 100th Anniversary patch adorns the right sleeve. The uniform number, jersey size, and year ("65 40 69") are chain-stitched in blue upon a white strip tag located in the collar. A "Spalding" label and adjacent "40" size tag are affixed to the left front tail. Located directly below are a laundry tag and an adjacent flag tag reading "Set 1 1969." The MLB Anniversary patch on the right sleeve is an authentic example, but is not original to the garment (the original patch was removed and then later replaced with the present example). With the exception of the restored MLB patch, the garment is original as issued, with no other alterations. Moderate-to-heavy wear is exhibited throughout, which indicates that the jersey most likely saw later use by one of the Braves' minor league affiliates. Despite the absence of Paige's name in the garment, research indicates that Paige was the only player to wear number "65" with the Braves in 1969.

Satchel Paige game-worn jerseys are among the rarest of all postwar Hall of Famers. This particular coaching jersey is only the second Paige Major League garment we have ever seen (the other was a 1948 Cleveland Indians jersey), making it a "holy grail" for any advanced Hall of Fame uniform collector. (To the best of our knowledge, no documented Satchel Paige game-worn Negro League jersey/uniform has ever surfaced.) Paige served as a coach with the Braves in 1968 and 1969 and that two-year tenure marked his only professional association with a Major League team following his retirement as a player. Paige, of course, was the most famous of all Negro League players. His colorful personality and blazing fastball combined to make him literally a household name. In a career that began in 1926 and spanned 40 years, Paige played for 12 Negro League teams, including the 1930’s Pittsburgh Crawfords and the 1940’s KC Monarchs, two of the Negro League’s best all-time teams. By his own estimation he pitched 2,600 games with 300 shutouts and 55 no-hitters. Paige finally made in to the major leagues with Cleveland in 1948 at the age of 42. As the oldest rookie in baseball history, he went 6-1 with a 2.48 ERA down the stretch, to help pitch the Indians to the pennant and World Series title. He pitched three shutout innings for the Kansas City Athletics in 1965 at the age of 59. A consummate showman and one of the best pitchers in baseball history, Paige was the first Negro League inductee into the Baseball Hall of Fame in 1971. LOA from Dave Grob/SGC. Reserve $2,500. Estimate (open).