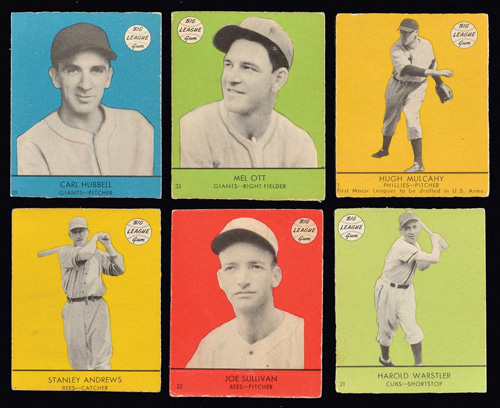 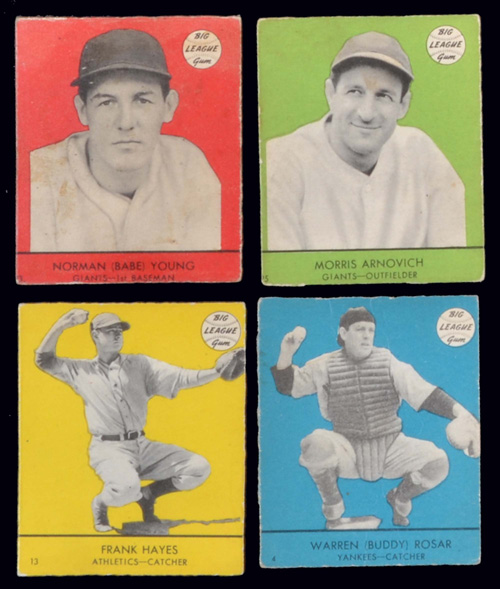 Very attractive medium-grade complete set of 1941 Goudey. Condition is ten Ex, twelve Vg to Vg-Ex (mostly Vg), and eleven Fr to Gd (including one Pr and one with a slight trim). This is a very attractive mid-grade complete set of Goudey's final baseball card issue. Each card features a black-and-white image of a player set against a blue, green, red, or yellow background. The player’s name, team, and position are printed in a box below the player’s image. However, due to poor quality control during the cutting process, slight miscuts are common with this issue. The reverse of these cards is blank. Keys: #1 Mulcahy (Ex), 20 Carl Hubbell (HOF, Ex+), 21 Warstler (short print, Ex), 22 Sullivan (short print, Vg+), 23 Young (short print, Pr), 24 Andrews (short print, erased mark on reverse, otherwise Vg), 25 Arnovich (short print, Vg+), and 33 Mel Ott (HOF, Vg-Ex). One of the most unusual and overlooked of all 1933-1941 gum-card issues, 1941 Goudeys are rarely offered in set form, and their rarity and historical significance as Goudey's last baseball-card issue seem not to be factored into their value in the modern collecting era. Because of the cutting issues naturally associated with the set, 1941 Goudeys rarely grade highly, and there is no Joe DiMaggio or Babe Ruth card to draw attention to the set. These two factors no doubt contribute to many collectors overlooking this set in the modern graded-card era, making this issue a particularly interesting value compared to the respect they received in the early days of organized collecting. Total: 33 cards. Reserve $500. Estimate $1,000+.