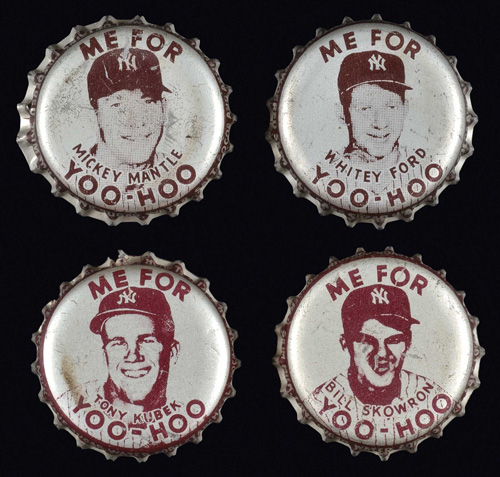 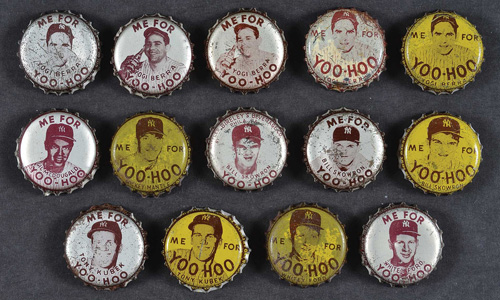 Scarce collection of eighteen 1959 Yoo-Hoo bottle caps, all of which feature a portrait image of a New York Yankees player. Each player is identified in print below his image, with the text reading “Me For Yoo-Hoo.” According to the Standard Catalog of Baseball Cards, six different players comprise the complete set at this time, but it is acknowledged that additional, yet undiscovered, player caps may have been issued at the time. The offered set includes each of the six players, including all but one of the variations (Ford, hat straight), as well as duplicates. The number of bottle caps for each player, if more than one, is noted in parenthesis. The collection is composed of the following: Mantle (2), both the large and small; Berra (5), two drinking and three portrait; Ford (3), all cap-tilted; Kubek (3), two cap tilted, one cap strait); Skowron (4), one large, one cap straight, two cap tilted; and McDougald. It should be noted that it was only recently that both the Skowron and Kubek bottle caps surfaced, making this one of the few complete sets we have ever seen offered. The McDougald cap and one of the Berra drinking caps are in Excellent condition overall. The remainder range from Fr to Vg-Ex, averaging Gd/Vg, with all displaying common flaws such as small dents, abrasions, and light oxidation. Total: 18 bottle caps.