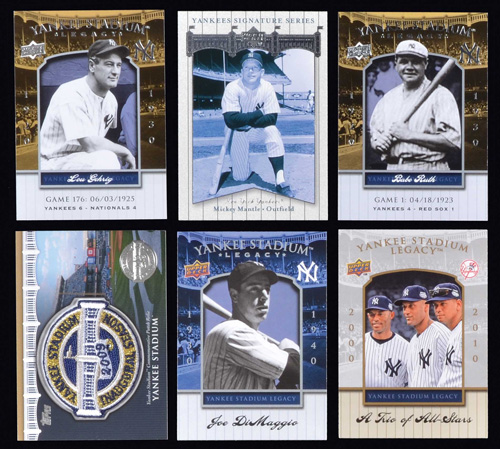 Presented is an incredible complete set of 2008 Upper Deck Yankee Stadium Legacy cards, totaling more than 6,500 cards from the set recognized by the Guinness Book of World Records as the largest trading card set ever produced. In 2008, as old Yankee Stadium was celebrating eighty-five seasons of hosting baseball games and the New York Yankees, Upper Deck set out to honor the landmark with a set of unparalleled proportions. One card was issued for every game played at the stadium along with cards honoring significant non-baseball events, such as the Papal visit and the Ali/Norton fight. Cards from the set were issued beginning in early 2008 across a number of Upper Deck products, and a challenge was extended to collectors to complete this gargantuan set. Our consignor was one of the collectors inspired by Upper Deck's challenge and promise of rewards, including a meet-and-greet with Derek Jeter and a card issued as part of the 2009 Upper Deck set, to the winner. While he was not the winner (the first complete set was assembled in eight and half months), after two years of dogged determination, he crossed the finish line. As one would imagine, complete sets of this issue are extremely rare. We have heard of only a handful of complete sets, and we are aware of only two to make it to auction, both of which were sold shortly in the years following the promotion and realized in excess of $10,000 each. To this day, this set is revered among Yankees fans as a stellar documentation of the history to which both the franchise and the stadium were witness. This set has been carefully saved by our consignor in Near Mint or better condition overall and is housed in beautiful black leather binders, which cost hundreds of dollars alone. This is an incredible opportunity to acquire one of the few complete sets known to exist of this exciting and unprecedented 6,500+ card set honoring the New York Yankees and Yankee Stadium. Reserve $1,000. Estimate (open).