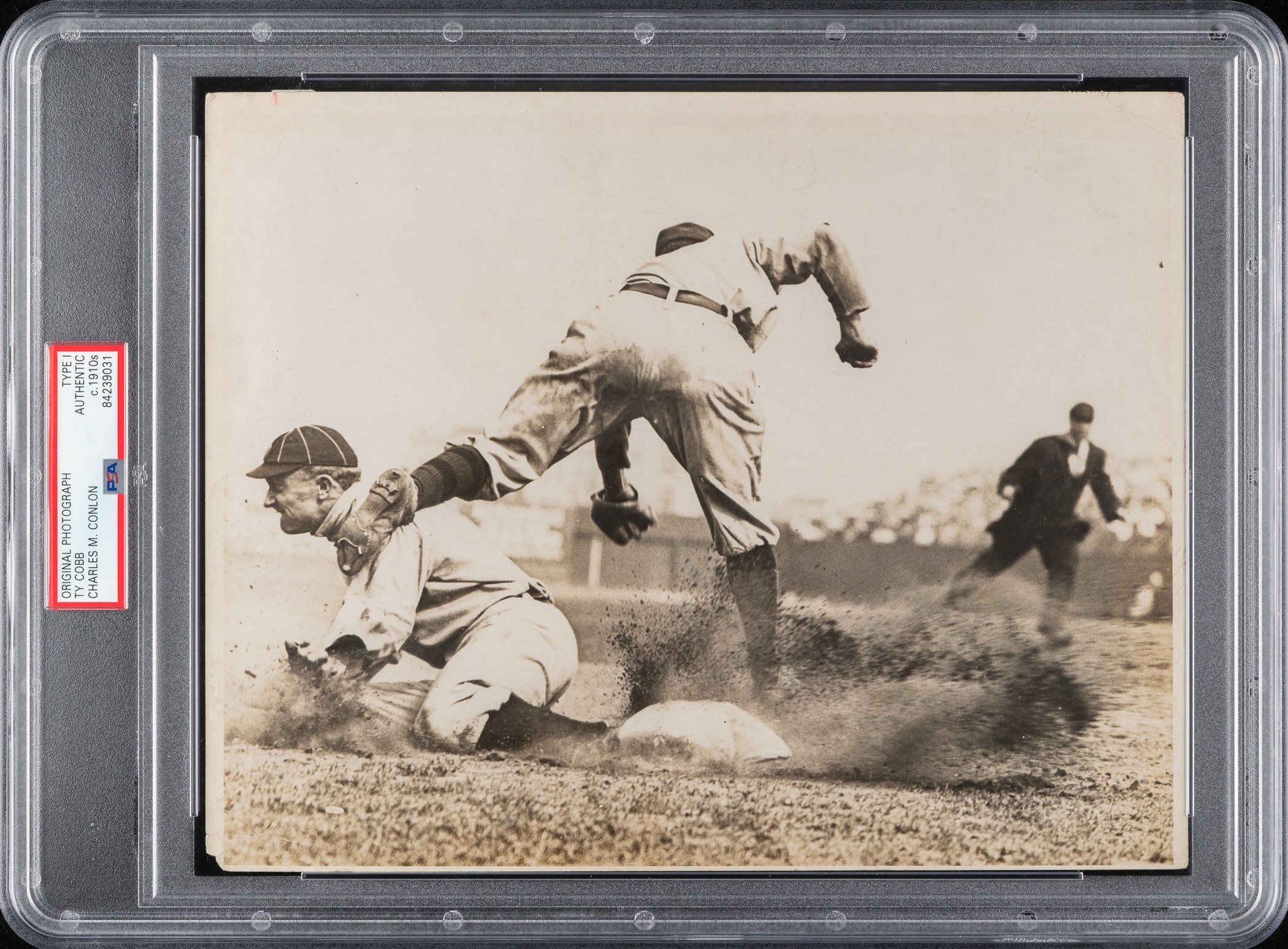 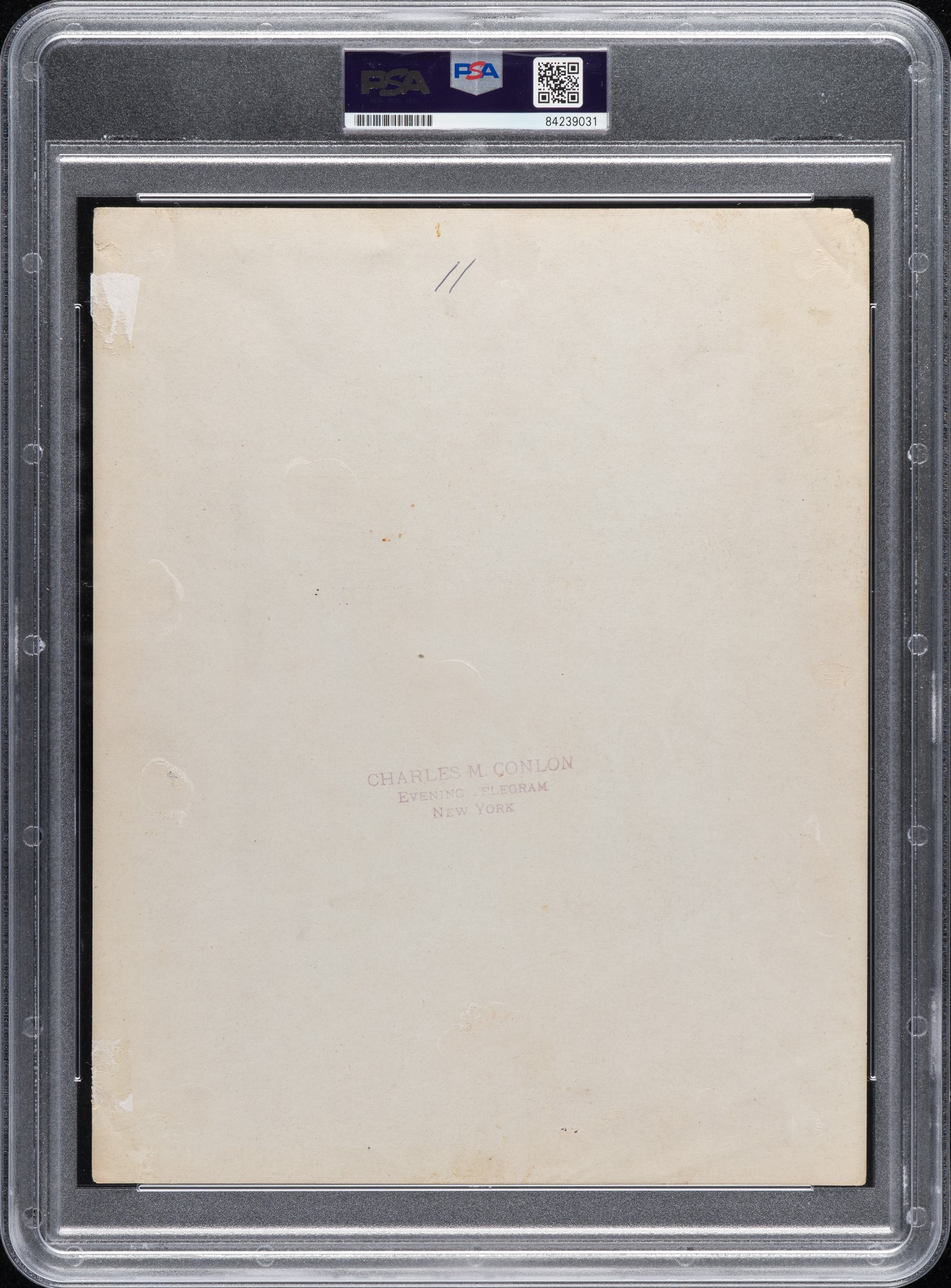 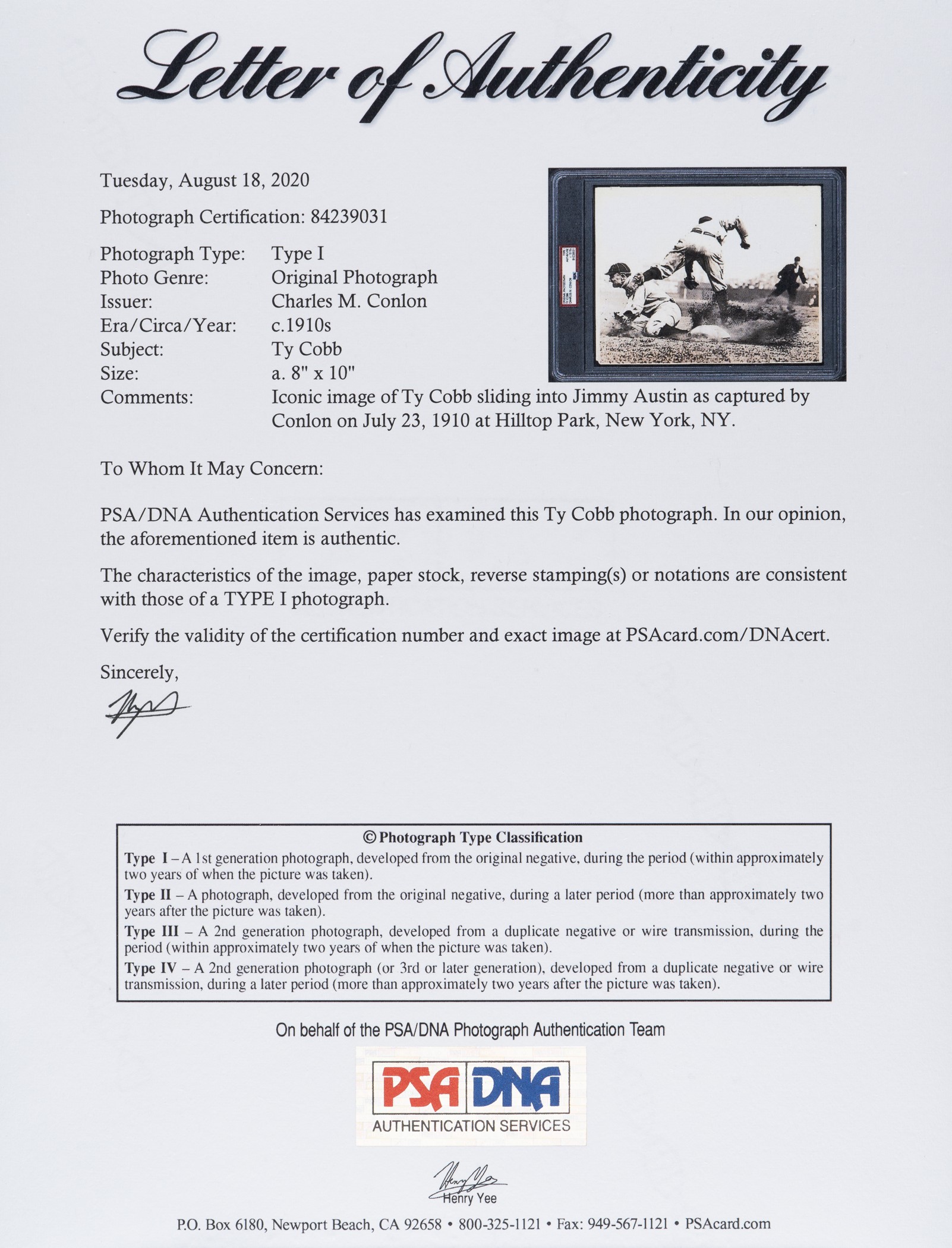 In every field of collectibles there is one piece, one singular item, that rises in stature above all others and becomes iconic. In art, it is the Mona Lisa. In baseball cards, the T206 Honus Wagner Card. In musical instruments, a Stradivarius violin. Baseball photography, too, has its own paragon of visual perfection, and it is not surprising that it comes to us from the gifted lens of the man many consider to be the greatest practitioner of his craft: Charles Conlon. On July 23, 1910, at Hilltop Park, home of the New York Highlanders, Conlon shot what is universally regarding as the most visceral sports photograph ever taken. The image captures the pure fury that was Ty Cobb as he slides into third base on an attempted steal and makes Highlanders third baseman Jimmy Austin pay for his impudence in attempting to make the tag. The determination on Cobb's face, the dirt flying in all directions, and Austin's futile attempt to catch the throw from the catcher while trying to avoid serious injury from the steel shards emanating from Cobb's shoes combine to elicit an emotional response that is unmatched by any other baseball image.

Presented is one of the most significant items that Robert Edward Auctions has ever had the privilege of presenting at auction: an original example - only the second confirmed - of this iconic photograph, encapsulated and certified Type I by PSA/DNA. While this photo has been reproduced countless times in both books and periodicals, and second-generation copies are plentiful in the hobby, an original, first-generation example was, for many years, unheard of. In 2015, the first confirmed example surfaced, exciting collectors, researchers, and photography enthusiasts alike. Eventually transacted privately for $250,000, that example instantly became the gold standard of baseball photography, sitting alone atop the record books as the single most expensive sports photograph ever sold.

Our consignor purchased this photo at auction nearly three decades ago at at time when there was often no distinction made between an original or later-day print and long before official designations were formulated. After purchasing it, the photo was matted and framed together with a Ty Cobb check, with the image as a bold reminder of Cobb's prowess and power, and it remained on our consignor's wall until recently. Upon consigning the framed combination to REA, we disassembled the frame to encapsulate the Cobb check and offer the photograph separately. We were immediately struck by the clarity and condition of the photograph, but because there have been so many second-generation prints made of this photo (Cobb himself kept them on hand to honor requests from fans), we remained cautiously optimistic that we had, perhaps, uncovered an incredible original example of this famed photograph. After thorough examination by PSA/DNA experts, it was confirmed to be only the second-known original example and the finest of the two reviewed to date.

For nearly 40 years, beginning in 1904, Charles Conlon was the preeminent baseball photographer in the country and his home base of New York City, which supported both an American and National League team, afforded him the opportunity to photograph nearly every Major League player. Cobb was one of his favorite subjects, but the shot that became Conlon's most famous photo was born more out of luck than skill. In a 1937 interview with The Sporting News, Conlon recounted the events of that fateful day:

The strange thing about the picture is that I did not know I had snapped it. I was off third, chatting with Jimmy Austin, third baseman for the New York Club. Cobb was on second with one out, and the hitter was trying to bunt him to third. Austin moved in for the sacrifice. As Jimmy stood there, Cobb started. The fans shouted. Jimmy turned, backed into the base, and was greeted by a storm of dirt, spikes, shoes, uniforms -- and Ty Cobb. My first thought was that my friend, Austin, had been injured. When Cobb stole, he stole. Spikes flew and he did not worry about where. I saw Cobb's clenched teeth, his determined look. The catcher's peg went right by Jimmy, as he was thrown on his face. But in a moment I realized he wasn't hurt, and I was relieved because Jimmy and I were very close friends. Then I began to wonder if by any chance I had snapped the play. I couldn't remember that I had, but I decided to play safe and change plates anyway. I went home kicking myself. I said, 'Now there's a great picture and you missed it.' I took out my plates and developed them. There was Cobb stealing third. In my excitement, I had snapped it, by instinct.

The photo (10 x 8 inches), which bears Conlon's credit stamp ("Charles M. Conlon/Evening Telegram/New York") on the reverse, displays a tiny chip in the lower left corner, moderate creasing in the upper right and lower left corners, and a few additional light creases. A few small areas of paper residue are evident on the reverse from its having once been mounted. The photograph remains in Very Good to Excellent condition overall. As noted earlier, it is superior to the other confirmed original example, which bears more extensive chipping to the image along with a newspaper slug on the front bottom border.

This original photograph is, without a doubt, the most significant piece of baseball photography (and perhaps all sports photography in general) ever to be presented at auction. It is hard to imagine a finer example of this item, which would immediately sit at the pinnacle of any baseball memorabilia collection or collection of sports or iconic photography. A museum-worthy piece that may never again be available for consideration! Reserve $50,000. Estimate (open).