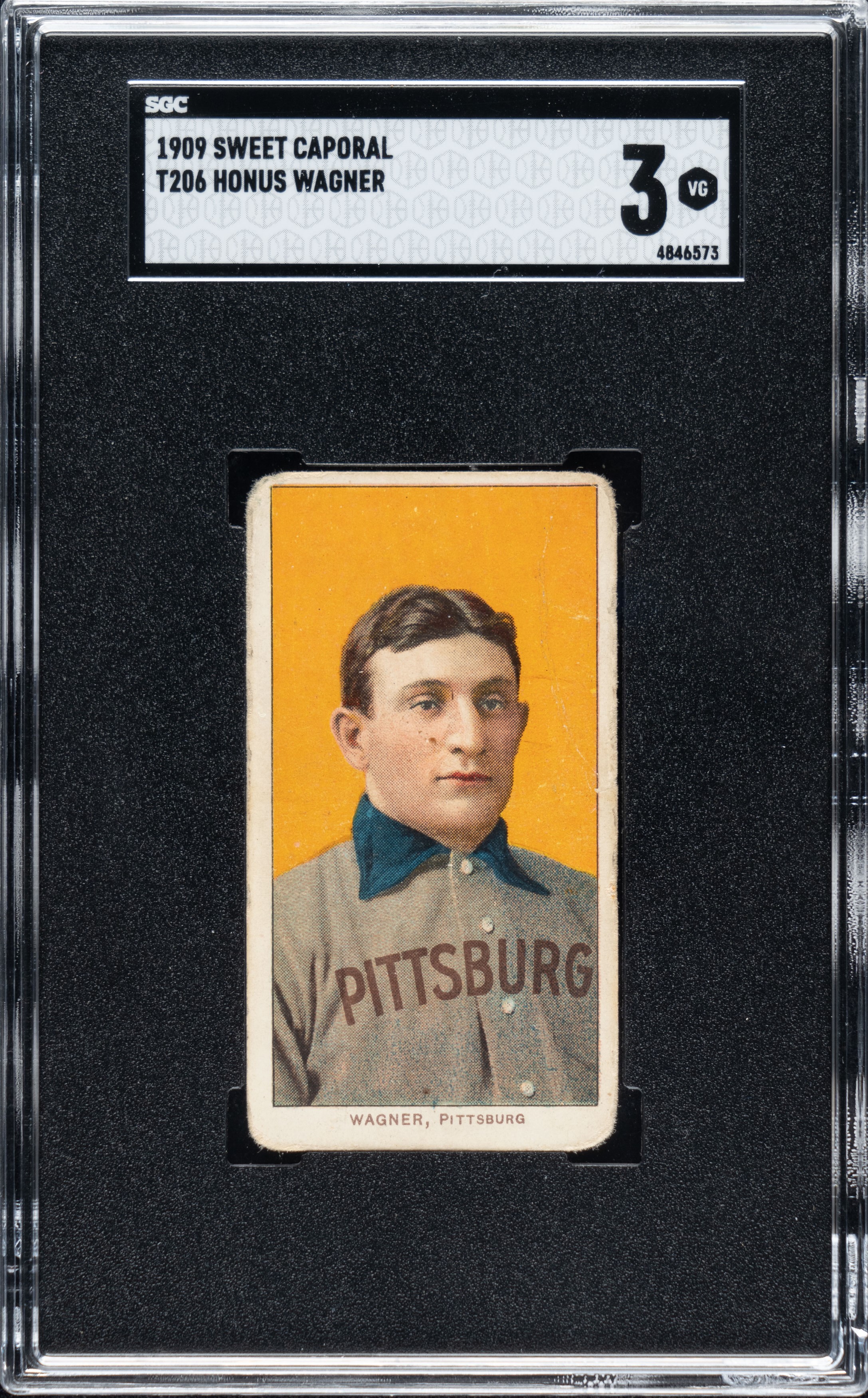 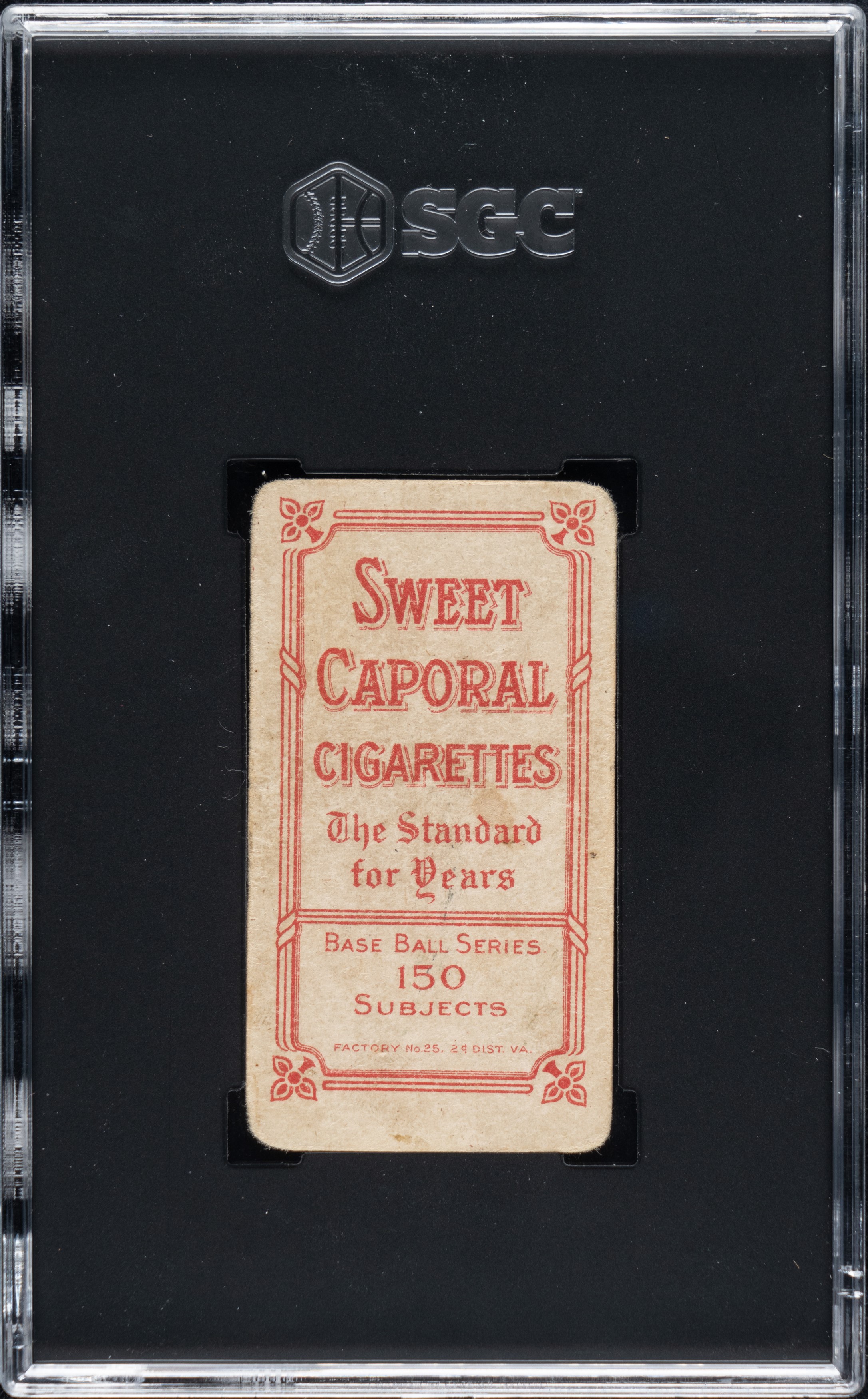 Robert Edward Auctions will accept cryptocurrency as payment for this item. Please contact us for more information.

In every field of collectibles there is one piece, one singular item, that rises in stature above all others and becomes iconic. In art, it is the Mona Lisa. In musical instruments, a Stradivarius violin. In comic books, it is Action Comics #1, featuring the first appearance of Superman. In baseball cards, the T206 Honus Wagner card enjoys its rightful place atop the hobby. For more than a century, the Wagner card has become synonymous with baseball-card collecting and elicits wide-eyed reactions from non-collectors and diehards alike.

Every T206 Wagner naturally has a great story, sharing the Wagner legend that is now part of classic American folklore, and every Wagner also has an additional story relating to its provenance. Collectors have always been fascinated with all aspects of the history of Wagners: how they were discovered, where and for how much they have been purchased, where they have been, how they have happened to survive. Sometimes there are more questions than answers, and sometimes a Wagner is special in ways that no other examples share.

Robert Edward Auctions is extremely pleased to present one of the finest examples of the legendary T206 Wagner in existence. This card was originally discovered on Long Island in 1973 by legendary collector/dealer Mike Aronstein (of TCMA fame). It was offered at auction at a Detroit convention run by a group of collectors, including Frank Nagy, which made it one of the first (if not the first) documented public auction sales of a Wagner. A bidding war broke out between collectors Fred McKie of New Jersey and Joe and Karen Michaelowicz of Virginia. Eventually, McKie emerged victorious, taking home the card for his winning bid of $1100. Once back in New Jersey, the card was a centerpiece in his impressive collection until 1976, when he sold every card he owned to a voracious local collector named Barry Halper. Halper would go on to assemble one of the most impressive baseball collections ever, including at least two Wagner cards at one time. At some point in time, Halper traded this example to another collector, where it is believed to have rested for more than three decades as the centerpiece of an ungraded T206 set compiled by a Texas collector. (Our thanks to Fred McKie for adding this incredible backstory to this already impressive specimen.)

In 2012, it entered the known population of T206 Wagners after SGC graded it VG 3. It was sold at public auction that same year for $1,232,466, a record for the grade, which was broken the following year by Robert Edward Auctions – a testament to the strong and ever-expanding interest in the T206 Wagner card. The offered example transacted privately in the last two years at a significant premium to its 2012 sale price. Recent public sale pricing for T206 Wagners has illustrated that demand continues to dwarf the supply, with an SGC Authentic selling for $2,520,000; an SGC 1.5 selling for $2,280,000; and a PSA 2 selling for $3,751,500.

The Card: Graded VG 3 by SGC. This extremely attractive T206 Honus Wagner possesses virtually every quality highly desired by collectors. It has vibrant colors, a bright orange background, and a crisp, bold portrait. The card is well centered (very slightly to the top), and the corners show even wear, with only a single small crease present on the entire card, placed unobtrusively to the right of the image. The advertisement for Sweet Caporal Cigarettes printed on the reverse is perfectly centered.

This is a particularly strong T206 Wagner that far exceeds the condition and visual appeal usually found with T206 Wagners. This is very easily seen just by looking at the card, but it is further confirmed when one evaluates the known T206 Wagner population as documented by the PSA and SGC population reports.

By any measure, this is one of the highest-grade examples of the T206 Wagner in existence! Of the fifty T206 Wagners listed on the combined PSA and SGC population reports (which may be a bit high as several examples have been crossed between the two companies over the years), twenty-six grade Poor or "Authentic," three grade Fair, and eleven grade Good. The graded population of T206 Wagners graded VG or higher has not changed since REA offered the “Oceanside Wagner” in 2015!

A grade of VG is exceptional for a T206 Wagner, and the visual appeal of the offered example places it at or near the top of the already exclusive company it keeps. This is a phenomenal-looking card in all respects that elicits a positive and awed response from everyone who sees it. The colors are noticeably brighter, fresher, and bolder than virtually every other T206 Wagner in existence. The image is perfect, and it shows just enough honest wear to give it character but not serve as a distraction in any way.

History has shown that the T206 Wagner has always been a tremendous store of value, and has gradually climbed in price for decades, commanding ever-impressive sums in all grades. Higher-grade examples are few and far between. Based on what we know about the hobby’s best examples of this card, many are in extremely strong hands, and it would not at all be surprising if this example is the last of the high-grade Wagners to appear at auction publicly for many years to come.

It is a great privilege and honor for us to be chosen to present this card - one of the finest examples in existence of card collecting's greatest treasure and potentially heir to the throne of the most valuable card ever sold at public auction. Reserve $1,000,000.